Gee, I’m sooo shocked that Chelsea Handler didn’t even wait for the bodies to grow cold or the blood to dry before she blamed Republicans for the shooting yesterday in Texas. 26 people were gunned down by a nutcase in full body gear, who was an atheist and an Alt-Left Antifa goon. He had also been court-martialed in the military for spouse and child abuse. So, tell me Chelsea… exactly what did any of that have to do with Republicans? You think because we support Second Amendment rights that we enabled this guy? You are delusional.

The guy was a felon. He should never have had a gun in the first place. He was also a hateful liberal, something Chelsea can relate to. He would have killed people whether he had a gun or not. There’s always a convenient way to take people out, be it guns, knives, bombs, poison, fire… whatever is handy. “Innocent people go to church on Sunday to honor their God, and while doing so, get shot in killed. What country? America. Why? Republicans,” the former “Chelsea” host, who has gone after the GOP before on issues such as gun control, wrote. How would she know? I doubt she’s ever gone to church or cares about that at all. She’s just seizing on a monstrous act of brutality to call for gun control. 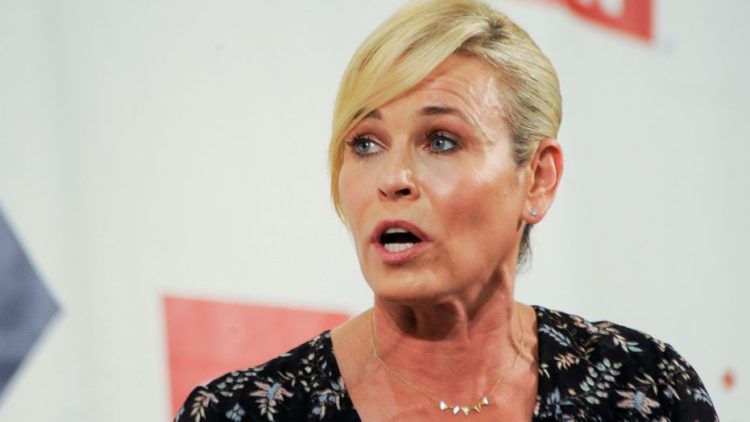 After Handler’s insensitive, poorly timed comments, she was savaged on Twitter. Good. “The bodies aren’t even cold yet and you are politicizing them. You really have a dark heart,” one commenter wrote. “You’re a hypocrite and part of the problem with your constant tweets of hate that separates the country,” another said. Agreed. We don’t need some washed-up comedian lecturing us on morality or on what God-given rights we should or shouldn’t have. She doesn’t have that right since she is a depraved celebrity who wouldn’t know right from wrong if it trout smacked her.

“Does your career depend on you being a vile, callous person, or is that a personal choice?” another commenter wrote. “You are a terrible human being,” wrote one. “Are you really that ignorant?” another said. Why, yes to both of those… she is.

Handler also recently ended her Netflix gig because it sucked and because she wanted to go full tilt into political activism:

“Like so many across the country, the past presidential election and the countless events that have unfolded since have galvanized me. From the national level down to the grassroots, it’s clear our decisions at the ballot box next year will mark a defining moment for our nation,” she wrote in a statement at the time. “For these reasons, I’ve decided not to return for another season of Chelsea, and instead devote as much time as I can to becoming a more knowledgeable and engaged citizen and to focus on projects that have significance to me.”

She’s failed before she’s even begun. Typical. But she was far from the only celebrity to go after gun rights. Chief among them, douchebag supreme, Stephen King: “How many more have to die before we enact sane gun control laws?” Then a whole parade of asshats followed that bull feces.

“Obviously, [the state of] gun control in this country is totally unacceptable, and the gun lobby is so strong and so powerful that anytime a celebrity can bring attention to this cause — among many other [causes] — you know it’s an easy thing for anyone to do,” Handler told the Hollywood Reporter in an interview in June.

“Nobody is trying to take away your guns,” she added. “If you want to go shoot, you know, whatever, in the woods, that’s fine, but it’s a hobby. If your hobby is [affecting] innocent people being killed all the time, children included, don’t you think you should reconsider the lack of restrictions placed on your hobby?” She said a bunch of this crap after the Mandalay Massacre in Vegas. She needs to shut it and go away… and stay away.

Innocent people go to church on Sunday to honor their God, and while doing so, get shot in killed. What country? America. Why? Republicans.

The bodies aren’t even cold yet and you are politicizing them. You really have a dark heart. #NastyWoman[3]

You're a hypocrite and part of the problem with your constant tweets of hate that separates the country.

Does your career depend on you being a vile, callous person, or is that a personal choice?

Are u really that ignorant?