Joan Rivers was one of Hollywood’s most beloved celebrities, and her death left many stars devastated. Now, her penthouse in New York City has been bought by a Saudi prince, and he’s making a lot of changes. 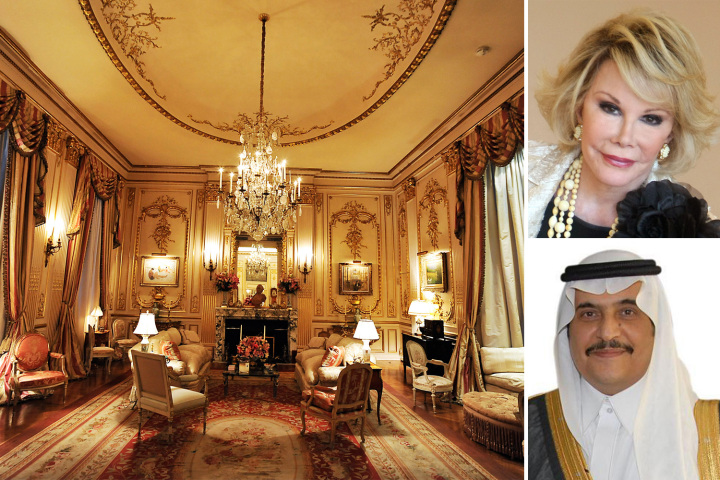 In July it was claimed Joan Rivers’ Upper East Side apartment in New York City had sold to ‘Middle Eastern royalty’ for $28 million.

Now DailyMail.com can reveal exclusively the buyer is Muhammad bin Fahd, the son of the late King Fahd and the former governor of the Eastern Province of Saudi Arabia.

The 65-year-old prince has been remodeling the property – a 5,100-square-foot, four-bedroom penthouse – since the purchase, and neighbors are ‘shocked,’ according to an insider.

‘Ever since Prince Fahd bought the home nearly two months ago, he has had designers and contractors in and out of the place,’ a source tells DailyMail.com.

‘He is ripping it to shreds. Everyone is surprised because the place had a certain French look, it was very specific, and one would think the buyer would be into that. And now he doesn’t want that.’
The property, which is only a half block from Central Park and walking distance to The Plaza, will look completely different from the way Rivers had it, said the insider.

Joan, who passed away in September 4, 2014 from a surgery gone wrong, decorated her home in an orate fashion.

There were crystal chandeliers, marble fireplaces and gilded walls.

The Louis XIV-inspired rooms – which include both a former ballroom and music room – have 23-foot ceilings and antique columns. The penthouse also boasts two large entertainment spaces, which can accommodate 125 people.

Joan once described the condo as ‘where Marie Antoinette would have lived if she had the money.’

‘The whole Palace Of Versailles thing is going,’ said the source. ‘It looks like all traces of Joan’s style will be erased.’

The insider added, ‘It was not the look Prince Fahd wanted. So he is erasing what Joan did. It’s kind of a shame. First Joan died. Now her condo is dying. But that is life, it is constantly changing. Still, it feels weird.’

‘The home will have a new, more update look. Top designers are being used.’

While the source added that ‘no one has made a formal complaint because they can’t, it’s not their condo,’ it is being gossiped about among the owners. ‘It is unsettling to say the least,’ added the insider.

While it is understandable that people would be sad to see another vestige of Rivers’ life gone, it’s hard to understand why they are gossiping and upset about it. The man owns the penthouse now — he has every right to remodel and make the home his own, and if they have a problem with that, then frankly, they need to get over it.