One Month Before Dying, Carrie Fisher Said Something Remarkable About Death

Carrie Fisher of Princess Leia / Star Wars fame[1], passed away this week. She was only 60 years-old. She suffered a massive heart attack last Friday while on a flight from London to Los Angeles. Carrie never regained consciousness and passed away yesterday. She had a unique outlook on life and she was loved by millions. When asked if she feared death, she said no. But she did fear the pain of dying. She said she would want someone like herself there with her when she went and since she would already be there, she was covered. That’s a remarkable attitude and unfortunately, she needed it as death came calling early.

2016 has been a brutal year for the Grim Reaper’s victims. It’s been a horrific year all-around and I am glad to see it go. Fisher’s daughter, Billie Lourd and her beloved dog, Gary, were by her side after she suffered a heart attack and was taken to UCLA Medical Center on Friday. Lourd released a statement confirming her mother’s death on Tuesday. “It is with a very deep sadness that Billie Lourd confirms that her beloved mother Carrie Fisher passed away at 8:55 this morning,” the statement, released by family spokesperson Simon Halls, said. “She was loved by the world and she will be missed profoundly. Our entire family thanks you for your thoughts and prayers.”

Beloved actress Carrie Fisher died Tuesday[3], just a few days after suffering a heart attack[4] on a flight from London to Los Angeles

The “Star Wars” actress was recently on a press tour for her new memoir, The Princess Diarist, and completed a round of talk show appearances and interviews.

In an interview with Rolling Stone in November, Fisher said a few words about dying, which are now extremely poignant.

“No. I fear dying,” Fisher answered. “Anything with pain associated with it, I don’t like. I’ve been there for a couple of people when they were dying; it didn’t look like fun. But if I was gonna do it, I’d want someone like me around. And I will be there!”

The actress added, “I’m not going to enjoy dying, but there’s not much prep for that.”

I have been around far too much death over the years. It is never easy. But I know that it is merely a transition on the road to going home. I hope that Carrie’s was an easy one and that she finds peace. Carrie had an addiction to cocaine and prescription drugs at one time and that probably added to her health problems.

Fisher was born in 1956 in Beverly Hills, California, to singer Eddie Fisher and actress Debbie Reynolds. She attended Beverly Hills High School until she left to act alongside her mother in a Broadway revival of “Irene.” Later, she studied at the Central School of Speech and Drama in London and was accepted into Sarah Lawrence College to study the arts, but did not graduate. You could see the resemblance to Debbie Reynolds in her face even as she grew older.

Fisher played Leia in the original “Star Wars” film, “A New Hope,” at age 19. She was 20 when the film was released in 1977. She continued to play a lead role in the iconic sci-fi series alongside co-stars Mark Hamill and Harrison Ford, starring in “The Empire Strikes Back” in 1980 and “Return of the Jedi” in 1983. She most recently returned to the franchise in 2015, where she reprised her role as Leia Organa — now a general — in “The Force Awakens.” While finding success with “Star Wars,” Fisher continued her incredible career on the silver screen in films such as “The Blues Brothers” (1980), “Hannah and Her Sisters” (1986) and “When Harry Met Sally …” (1989), among others.

Fisher was married to Paul Simon for a year and at one time was engaged to Dan Akroyd. She wound up with talent agent Bryan Lourd and they had their daughter in 1992. She also wrote the semi-autobiographical novel Postcards from the Edge. She also had a hand in “Hook,” “The Wedding Singer” and “Sister Act,” among other films.

Carrie Fisher is gone and I can’t quite believe it. She seemed like such a huge part of all our lives. She will be missed. RIP Princess. 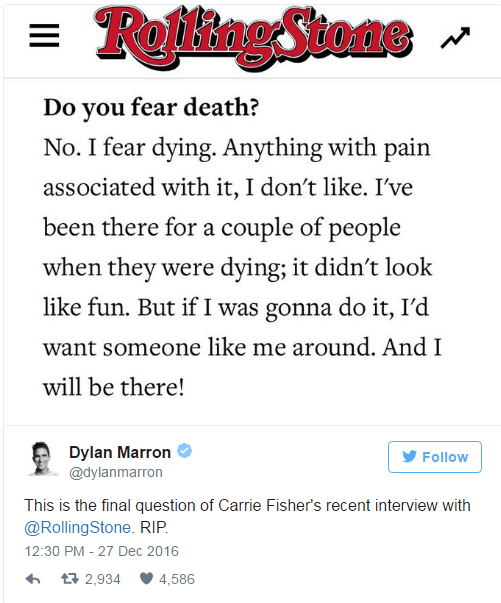 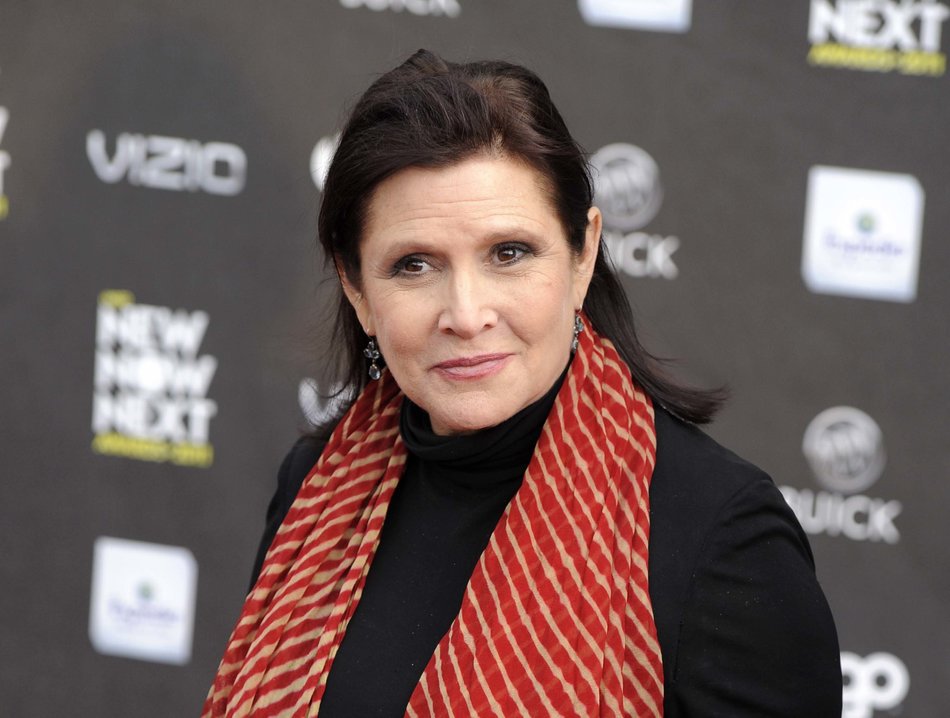