Picture of Faceless Man Goes VIRAL – Now This Celebrity Wants to Buy Him A Drink!

For Jimmie Cox, fixing a broken underground pipe was just another day on the job. But when an astonished resident posted a picture of him on Facebook, it not only went viral, but it caught the attention of a big celebrity. 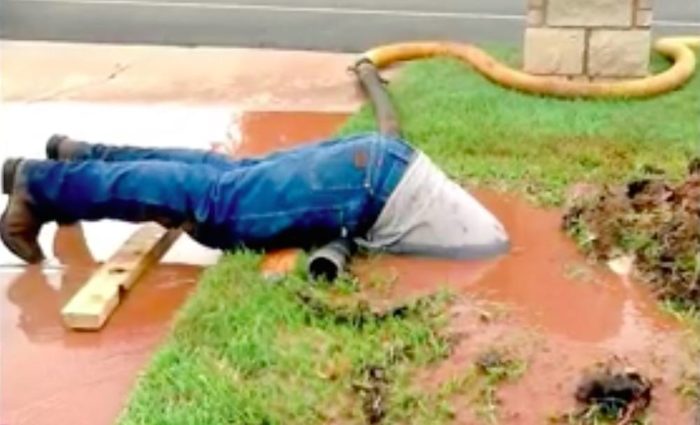 Last week, when an underground pipe burst near her driveway, Andrea Adams wasn’t sure what to do. Then she walked outside to see Cox — well, half of him — hard at work to fix the problem. Adams was shocked:

“When I walked back outside, the kid was in there.”

Submerged from the waist up, Cox had reached down into a five-foot hole in an attempt to clamp the line.

And he says it wasn’t really anything out of the ordinary:

“In this line of work, people do it a lot. I wasn’t even able to get the clampers, so we had to cut it and put a valve on there when it was underwater.”

The photo quickly went viral. Adams said that she has had to shut down her Facebook page:

“I posted the photo to Facebook, and within two hours, people in Brazil were commenting.”

She also got the attention of former “Dirty Jobs” host Mike Rowe, who posted the following on his own Facebook page:

“I don’t know who this guy is, but he’s all over my wall, all over Facebook, and all over the Internet. Hell of a thing to have your photo go viral, and still remain completely anonymous. At any rate, if you recognize him, tell him the first beer is on me…”

And not only did Rowe’s post get the attention of Wrangler Jeans Co.: 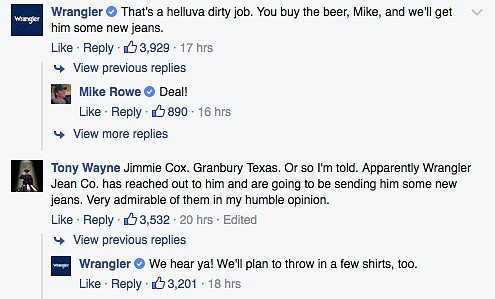 But it also got the attention of Cox himself, who just happens to be a huge fan of Mike Rowe’s: 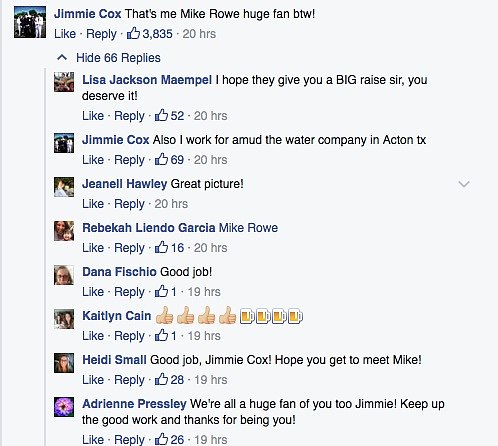 Hey, being enthusiastic about your job can pay off! And for Cox, it must be pretty amazing to see one of his idols give him a thumbs up.