I don’t think the left[1] has any sense of humor anymore… at least not a sane one. Jerry Seinfeld made a pun connected to his show ‘Comedians in Cars Getting Coffee’. Seinfeld has of late labeled political correctness as utter nonsense. Jerry introduced the next show’s featured guest, Lewis Black, and added: “Black’s life matters.” Then liberals on Twitter came unglued as you will see below. These people are professionally ‘offended’ at everything. I thought it was funny. Humor used to include poking fun at ourselves… can’t have that anymore, now can we? No soup for you!

Seinfeld is being labeled as insensitive for cracking a joke about Black Lives Matter. Give me a freaking break. You people really need to get a life. In an interview in 2015 on ESPN, Seinfeld lambasted the left for being too sensitive. He relayed to host Colin Cowherd, “I don’t play colleges, but I hear a lot of people tell me, ‘Don’t go near colleges. They’re so PC.’” Yeah, just ask Milo… he can relate. The poor guy even suffers from this crap at home: “I’ll give you an example,” he said. “My daughter’s 14 … My wife says to her, ‘Well, you know, in the next couple years, I think maybe you’re going to want to be hanging around the city more on the weekends, so you can see boys.’ You know what my daughter says? She says, ‘That’s sexist.’” SMH. It makes my brain hurt. 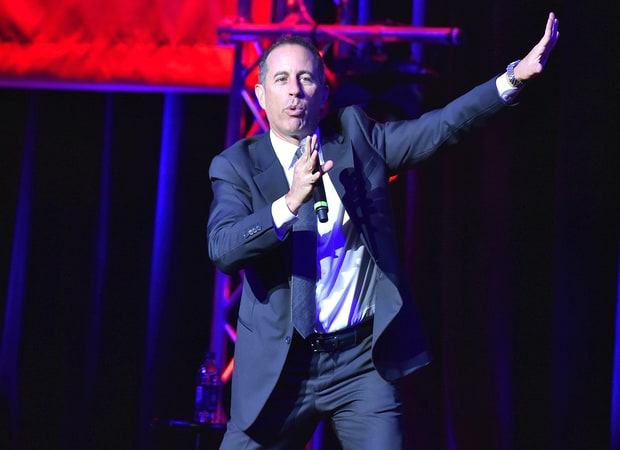 Jerry Seinfeld, who has said politically correct “nonsense” is hurting comedy[3], has a new example he can cite.

The comedian drew the ire[4] of many on Twitter over a tweet promoting a new episode of his web show, Comedians in Cars Getting Coffee[5].

In each episode, Seinfeld drives a guest to get coffee and their interactions are filmed. The show has been a big hit online and is in its ninth season.

On Thursday, he introduced the next show’s featured guest, Lewis Black, and added: “Black’s life matters.”

Critics were quick to pounce on his pun, saying it was “insensitive” to the Black Lives Matter movement.

Everything is racist, sexist or prejudiced anymore. Gone are the easy going times of the 80s, where even ribald humor was still funny. Those days don’t come back. This politically correct idiocy has all but ruined comedy. What they consider, or rather ‘allow’ as comedy anymore, is just not funny. Seinfeld had this to say about it: “I have no interest in gender or race or anything like that. But everyone else is kind of, with their calculating — is this the exact right mix? I think that’s — to me it’s anti-comedy. It’s more about PC-nonsense.” I agree so very, very much.

When I was in college, I worked at a prominent law firm in Vegas. I was walking home one day in a wool skirt, silk top and heels. A guy I knew scooped me up and jumped in the pool next to us. He was fully clothed. It ruined my outfit, but you know what? That was funny and I had a great time during that period of my life. I still laugh at some things others find inappropriate. But that is what humor is about. The left needs to seriously get over themselves and let the rest of us enjoy a laugh now and then.

Booooo, Jerry! Zero class. Educate yourself. You've got all the $$$ and access.

@JerrySeinfeld[10] ok bruh its simple, ur neither empathetic or supportive of the #blm[11] movement so don't try to use it as a twitter joke, coo?

It's a play on words that relates to current events. Quit being babies and actively LOOKING for what you want to be offensive

I'm so old I remember when we had a sense of humor & could even laugh at ourselves & not overly sensitive. No soup for you!