Rapper Ice Cube Confronts Maher Over His ‘N-word’ Debacle: ‘Sometimes You Sound Like a Redneck Trucker’ 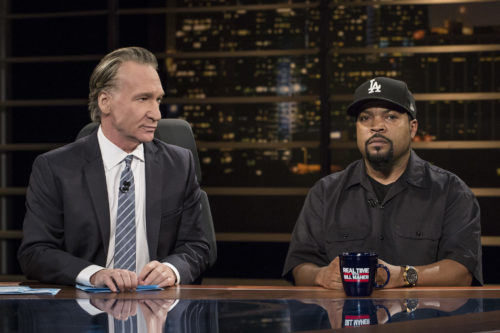 Rapper and actor Ice Cube[2] didn’t think Bill Maher’s use of the “N” word on a previous show featuring Senator Ben Sasse was funny. And he told him so.

“I knew you was going to a f*** up sooner or later. I did. I did. I love your show. You got a great show. But you’ve been bucking up against that line the little bit. You got a lot of black jokes. You do. Sometimes you sound like a redneck trucker. Yes, you do.”

Ice Cube continued, saying that hearing a “white person” use it, felt like a “knife stabbing” into him.

So, let’s get this straight. In lecturing Maher about bigoted slurs and filth, which were reprehensible to be sure, Ice Cube himself uses a slur against so called “rednecks” and truck drivers, as well as using the “F” word. Pardon us if we aren’t exactly impressed with your command of the English language.

Ice Cube schools Maher: Just because you have black friends doesn't mean you can use n-word https://t.co/ayPvwsDPbF[3] pic.twitter.com/qC1Z70ZFU1[4]

Cube was part of a panel at the end of Maher’s HBO show on Friday and let his displeasure be known. But isn’t this a bit hypocritical? Is Ice Cube saying that using the “N” word is wrong, or is he saying that it’s only wrong when a white guy like Maher uses it? Because there is a lot of rap music with that word in it. Do we hear Ice Cube lecturing those folks? Probably not. Liberals always have a double standard. It’s not okay to use that word, not for Maher, not for Ice Cube and not for anyone.

Almost the entire rap industry is heavily laced with profanity and racial slurs. Rappers make millions on using the foulest language, calling women horrendous names and talking about murder, not to mention ubiquitous racist statements and bodily threats against law enforcement. But Ice Cube is mad at Maher. There’s no excuse for Maher’s foul mouth. But let’s see some of this righteous anger turned against a music genre that adds verbal filth to our culture every day. Hey Ice Cube, either call out everyone, even those in your industry, or don’t call out anybody. Because it reeks of hypocrisy. We’ll wait.