We all knew that this year’s Oscars were going to flop because all celebrities want to talk about is how evil Trump and his supporters are, and they’re sick of being lectured by a bunch of 1%-ers about how they should vote. What nobody realized is exactly how much damage this politically-charged rhetoric was going to cause.

Ideally, the Oscars would have had nobody watching, but of course there are those who want to see their favorite celebrity get a giant shiny trophy that means nothing to anyone except them. Essentially, it is nothing but a giant pat on the back to those who wouldn’t be able to function in the real world.

That being said, even these sharply-dressed actors and actresses and a host of excellent movies wouldn’t provide enough motivation to keep Oscar viewership from sinking to a 9-year low. 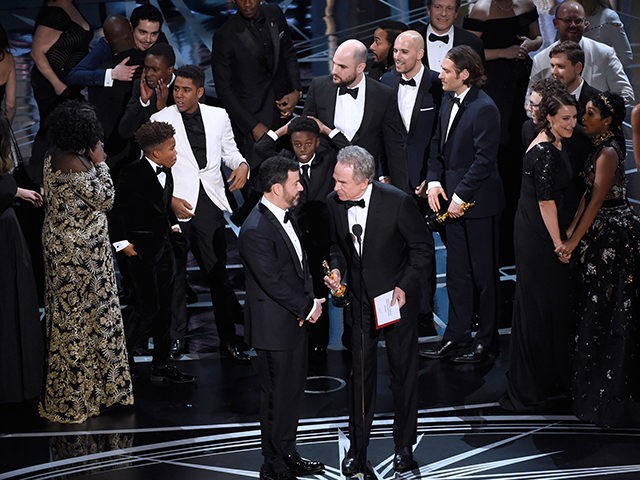 Early numbers[2] are saying the Oscars’ rating dipped down for a second consecutive year. Indications show that the 2017 awards show brought in a total of 32.9 million viewers, the lowest wince 2008. Deadline breaks down the numbers for us by year. 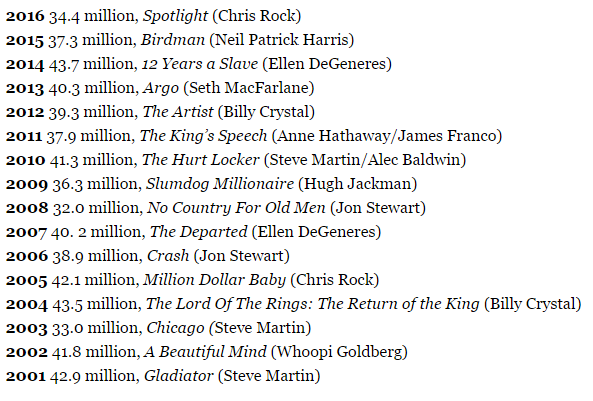 The Hollywood Reporternotes that figure is down around four percent from last year’s telecast, which drew a 23.4 rating in the early numbers. Last year’s broadcast ultimately drew 34.4 million viewers, enough to make it the third least-watched Oscars ever, so the lower initial numbers could mean this year’s broadcast drew even less total viewers.

Sunday night’s ceremony featured plenty of anti-Donald Trump jokes[5] from host Jimmy Kimmel, political statements from some of the honorees and presenters and one major upset.

At the tail end of the nearly four-hour-long show, Warren Beatty and Faye Dunaway mistakenly named La La Land the winner[6] of the night’s biggest award, when Moonlight had actually won. La La producer Jordan Horowitz paused midway through his acceptance speech to announce that a mistake had been made and called the cast and producers of Moonlight to the stage to hand them his Oscar.

Huh. So it turns out that people don’t like being told what they should believe by a bunch of court jesters.

Who would have guessed?