This woman has lost her freaking mind… 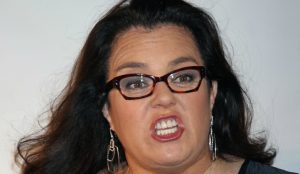 This is what happens when you’re so blinded by your ideology that you can’t think straight, or even think at all. Rosie O’Donnell’s so called “feud” with the President is well established, but this is possibly her strangest tweet yet.[2]

What exactly is her objective here? Making herself look like a bigger idiot, I suppose. At least she isn’t pretending to be a normal human being anymore and has shown us her true colors as the despicable pig that she really is.

To no one’s shock, she received plenty of flack on twitter.

siding with a dictator who just threatened to blow us all up.
.. remember in the 80s when you were funny.. and normal? #LoonyLefties[7]

I'm sure wouldn't be so supportive of Kim Jong Un if she knew how little food there is in North Korea.

Seriously, shield your children from this kind of filth. She is just an unhinged leftist trying to poison the minds in our country. It’s wishful thinking, but I urge her to rub the two brain cells she has left and try to analyze the situation critically.

How is Donald Trump even responsible for escalating the North Korean situation anyway? The Kim family has been in power over 70 years, hell-bent on enslaving its people and threatening war every time they want foreign aid. Our past presidents have been all too eager to trade money for “peace.” Look where that’s gotten us so far. They are an evil regime, the last remaining remnant of the Cold War. Why should we be capitulating to them again?

There is no easy solution to the international geopolitical mess that is North Korea. China, their last remaining ally, is tired of their antics. They have to balance that against the thought of 20 millions refugees pouring over their border if a regime change were to occur. It’s not as easy as “Trump is stirring up trouble like he always does,” it’s a little more nuanced than that.

For someone as brain dead as Rosie, it’s a matter of “Trump bad, me good.” I guess we shouldn’t hold mental patients to the same standards as everyone else.