So Kathy Griffin just posted an ‘I’M SORRY’ video. Her sincerity was not present in this video either. It was like she was just trying to pump out the words as fast as she could so she wouldn’t miss her favorite T.V. show that was about to be on in 2 minutes.[1] 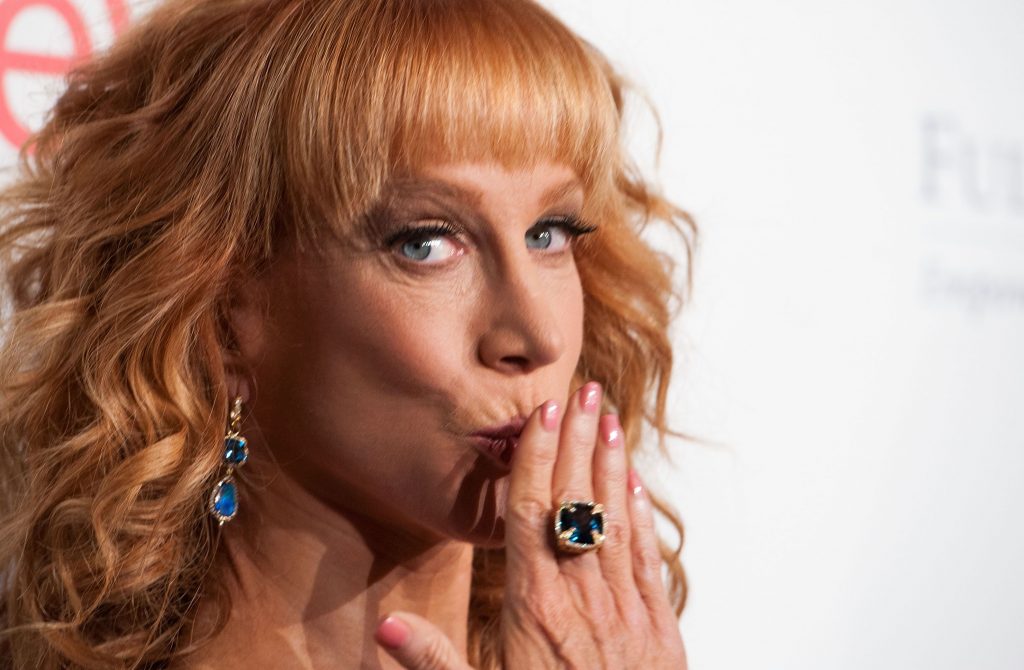 But, nonetheless she said she’s sorry for posting a video of herself holding the severed bloodied head of Donald Trump like she’s the new poster child for ISIS. Well…I have a few things to say about that.

She’s only “sorry” because she is now the object of ridicule and scorn…even her fellow libturds are outraged. Despite her unequivocally rejecting violence and deeply regretting it, these are one of those things there is just no excuse for. Even a 2 year-old would have known better…BEFORE posting it for the world to see.

She only cares to apologize because the left is not happy with her either. If they were lauding her, she would be singing her own praises for how provocative and avant garde the shoot was.

I second Mike Cernovich…it’s Satanic, but the dumb be-atch and her a, b, c and d-list leftist cohorts are too stupid to even know it.

The most ironic thing about Kathy Griffin is that she isn’t funny. When she guest appeared on Seinfeld, she was the perfect parody of herself…annoying as crap.

Okay…I think I’ve cleared my mind now. How about we get to her apology?

Kathy Griffin has issued an apology for posing in a photo showing her holding the severed, bloody head of President Donald Trump.

“Hey everybody. It’s me, Kathy Griffin. I sincerely apologize. I am just now seeing the reaction of these images,” the My Life on the D-List star said in a Instagram video.

“I’m a comic. I cross the line. I move the line, then I cross it. I went way too far,” Griffin said. “The image is too disturbing. I understand how it offends people. It wasn’t funny. I get it. I’ve made a lot of mistakes in my career, I will continue.”

The images were quickly condemned by social media users, many of them calling for a boycott of Griffin’s cross-country comedy tour.

A panel on CNN, the network where Griffin has co-hosted a live New Years Eve broadcast since 2007, downplayed the controversy Tuesday.

This is vile and wrong. It is never funny to joke about killing a president. https://t.co/zIiuKoMyFw[5]

Hours before issuing her video apology, however, Griffin responded to the backlash in a brief statement posted to her Twitter account.

“OBVIOUSLY, I do not condone ANY violence by my fans or others to anyone, ever! I’m merely mocking the Mocker in Chief,” she wrote.

A short time later, though, Griffin had deleted the images from her social media accounts and vowed to ask Shields to do the same.

I am sorry. I went too far. I was wrong. pic.twitter.com/LBKvqf9xFB[7]

No, you’re not. You’re sorry you exposed the Democratic Party as the hate cult it is. Democrats seemingly have more and more in common with ISIS terrorists than they do Americans.

If you think these extremists wouldn’t come after you and your family if given the chance, think again. We all remember Bill Ayers.

The DEM’s OWN this. They fostered this lunacy along with Hillary and that nutbag Maxine Waters. Hope it takes them all down at midterm elections.