Snoop Dogg is a disgusting human being.[1] I’m not even sure he’s human at this point. Once or twice, I thought he might be, but this removes all doubt for me. He just made a video, which I am sad to say I actually watched. In it, most of the actors are white made up in clown makeup. Originally, I was going to say this was a slam against white people, but he had at least one black girl done up that way too. This video is just full of sheer hatred.

I don’t like rap to begin with. I don’t view it as art or as aesthetic. But when you take what you believe is music and mix it with violent political dogma, it becomes propaganda. First thing, Snoop Dogg shows a white guy, who is depicted as hating his life, driving to work. He’s getting high when a police office notices him. Dogg depicts the cop as a clown eating donuts – the cop hatred here is REALLY obvious. The officer pulls the man over who throws clown paraphernalia at him. Then he opens his briefcase showing a gun and the officer shoots him twice, killing him, before radioing it in while a black guy in clown makeup watches him. All the guns are fake, but you get the drift. 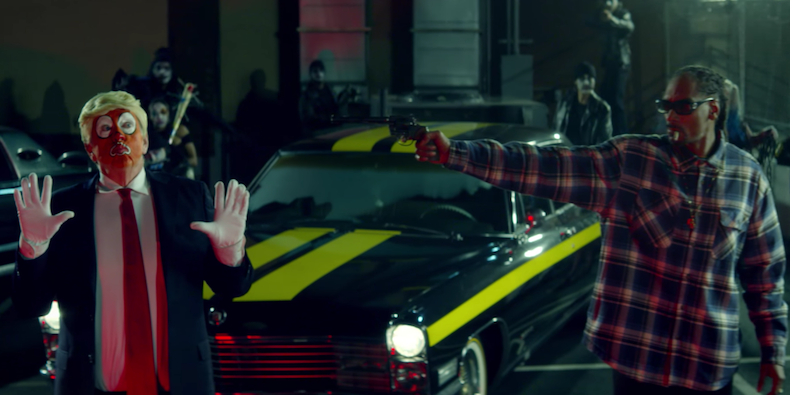 The ban that this motherf–ker tried to put up; him winning the presidency; police being able to kill motherf–kers and get away with it; people being in jail for weed for 20, 30 years and motherf–kers that’s not black on the streets making money off of it — but if you got color or ethnicity connected to your name, you’ve been wrongfully accused or locked up for it, and then you watching people not of color position themselves to get millions and billions off of it. It’s a lot of clown sh-t going on that we could just sit and talk on the phone all day about, but it’s a few issues that we really wanted to lock into [for the video] like police, the president and just life in general.

So, you’ve got your cop hatred, your racial animosity, drugs and then the icing on the clown cake. Snoop Dogg brings forth someone playing President Trump in clown face. He’s got Trump getting high as well, which shows he knows nothing about Donald Trump, who doesn’t do drugs or alcohol. This all leads up to Snoop Dogg pulling a fake gun on Trump and pulling the trigger, with a ‘bang’ flag coming out of the end. It insinuates a desire to assassinate our President. I wonder if he’ll get a friendly visit from the Secret Service over this.

There are a lot of drug references in this piece of crap, along with reparations for blacks being mentioned. Women are dressed as giant sex dolls and in the end they chain President Trump up and threaten him. Nice. How anyone can think this is anything but violent, hateful rhetoric is beyond me. That someone who lacks any talent whatsoever like Snoop Dogg does and makes millions anyway is also mind boggling. He’s a thug and uses his celebrity to spread hate. And the media is silent.