What happens when a washed up actress glimpses a chance to recover some of the relevance she has lost? You get Susan Sarandon attending the pro-Colin Kaepernick protest outside the NFL headquarters.

Does she even know why she’s there, or did her PR people tell her that it would be a great photo-op? Because I just don’t see her caring about the plight of a rich, black football player who wasn’t even any good to begin with.

And before anyone whines, “Oh you just don’t think he’s good because you hate his politics,” I have some news for you: Most of America had never even heard of this twerp before he decided to hurt a sport in a political arena. If he were any good at what he does (er, did) wouldn’t he have had some sort of name recognition? 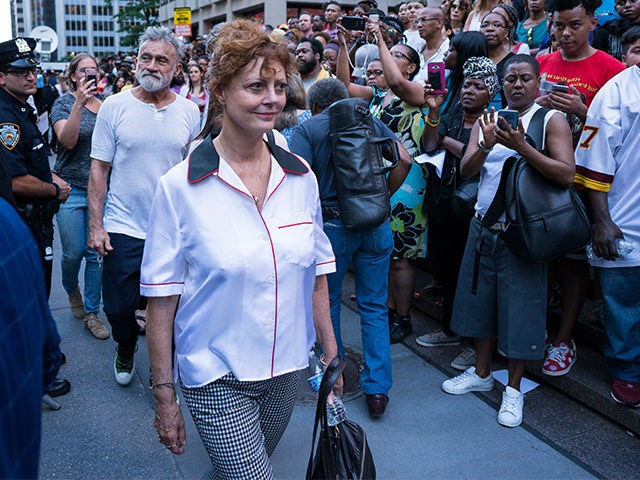 Sarandon snapped a picture of the protest to share with her followers, exclaiming that she supported Kaepernick and would stand with him against… I don’t know. I guess team owners who get to decide who they do and don’t want on their team?

Rally in support of Colin Kaepernick in front of @NFL[2]. Together we win. I stand with Colin. #ImWithKap[3] pic.twitter.com/lRCa1UWpa7[4]

So, she stands with a man who disrespects our country, wears “pig cop[6]” socks to a 49ers event and a Fidel Castro tee shirt, and she’s proud of it? Like what she’s doing is a good thing? I’m sorry, but I don’t see how any self-respecting team could want a man like that. He’s a liability and it’s certain that any team who picked him up would find themselves boycotted by those of us who support police officers and don’t celebrate murderous communists on our clothing. They’re making a strategic business decision and Kaepernick has no benefits. He was nameless before his protests and he will be nameless long after he finally accepts that nobody wants him wearing their jersey.