Pop star Taylor Swift has posted her sorrow for the victims hurt by the events in Las Vegas this weekend and quietly reached out to one of the victims in a show of support. As of now, 59 people have been confirmed dead after Stephen Paddock opened fire on a crowd below his hotel room in the Mandalay Bay and 527 people are reported to be injured.

On Monday, the Los Angeles Police Department confirmed that one of their female officers was shot at the Sunday country music concert while Jason Aldean performed the last set. Posting on Facebook, the LAPD wrote:

“Thank you to all who have called and experienced concerns of our Foothill Female Officer. She is stable and doing well.”

They then went on to describe that several LAPD employees were in Las Vegas for the festival and said that the officer who was struck by gunfire was expected to make a full recovery.

Swift was one of the many celebrities who posted in support of the victims of the massacre: 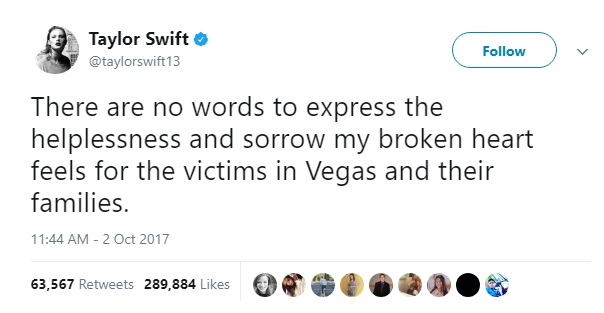 Swift, 27, got her career started when her family moved to Nashville to support her burgeoning career and her first hits were in country music before her move in the last few years into mainstream pop.

Posting a photo of one of the bouquets on Instagram, the LAPD’s Intel Analyst Kimberlee Binder wrote:

“Talk about a class act! @taylorswift sent multiple bouquets of flowers and plants to our station, as one of our officers was shot in Las Vegas last night. This is one of the smaller arrangements. Beautiful flowers can bring a smile to anyone’s face. Much respect.” 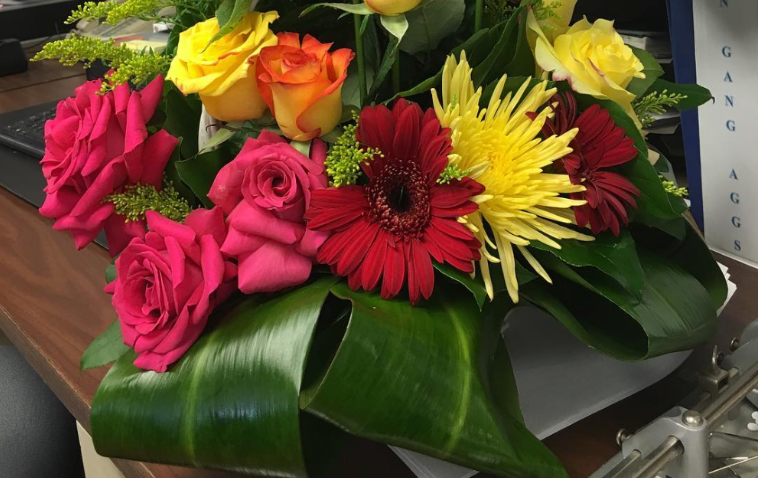 Unfortunately we can’t link to the original post, as the Instagram profile in question appears to have been deleted, but we did get this photo of the flowers!

Twitter tried, but failed to get her to say something political.

Please don’t. Please just let us have one pop star who is just a pop star, instead of a world of ultra political Lady Gagas and Katy Perrys. It’s hard for me to enjoy my mindless happy pop tunes when the artists have already made a decision to tell the world that they think I’m a stupid idiot for liking Trump.