Over the weekend[1], while Mike Pence was in Germany, Bono of U2 fame thanked the Vice President for supporting the Emergency Plan for AIDS Relief. Pence also thanked Bono and recognized the tireless work he has done as well in working towards relief for AIDS victims. Bono has also previously thanked President George Bush for helping fight against the AIDS pandemic. He has praised Bush on numerous occasions, including during a 2016 interview on MSNBC.

I understand that Bono is a Christian and a good man who believes in the causes he fights for. He’s also a great entertainer. He is not enamored with President Trump, but he has not let that get in the way of giving credit where it is due as in the case of Mike Pence. Bono began his charity work more than 30 years ago and has never wavered in his devotion to the causes he believes in. And I’ve never heard anything but good things about Bono. Along with fellow legendary rocker Sting, he helped organize Amnesty International’s Conspiracy of Hope Tour. I certainly don’t agree with Bono on everything, but I think his heart is in the right place. 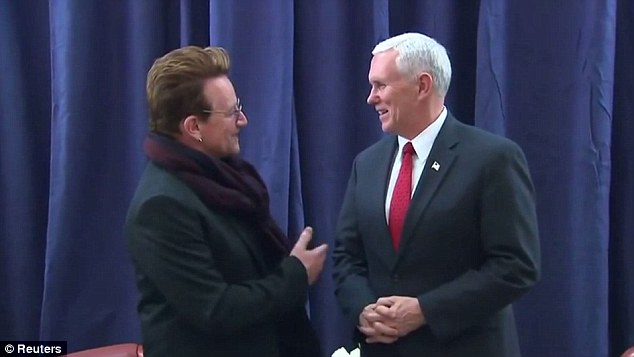 While the Trump administration might not have the support of the majority of Hollywood or the music industry, a curious thing happened on Saturday at the Munich Security Conference in Germany.

Legendary U2 rocker Bono met with up with Vice President Mike Pence to thank him for his past support in the global fight against AIDS.

Bono joked[3] that Pence was “the second busiest man on earth,” as he thanked the vice president for his support during the time Pence served in Congress.

“Twice on the House floor you defended that [President’s Emergency Plan for AIDS Relief (PEPFAR)]. That’s how we know you, and we really appreciate that.”

Pence returned the compliment, noting Bono’s long-time contribution to the fight against AIDS.

“It was an extraordinary historic accomplishment[,] and you played a leading role in carrying it forward.”

In March of 2016, an article in Fortune included Bono on its list of “World’s Greatest Leaders” for his fight against infectious diseases and poverty in Sub-Saharan Africa. His work is admirable and selfless… we could use more like Bono out there and Mike Pence is a good and giving man as well.

The left lost their ever loving mind over all this. I’ve included a few tweets below showing just how unhinged these people are. It is beyond me how you can hate someone for doing good works. They hate Pence because he is Trump’s VP. And now they hate Bono for having the nerve to thank Pence for helping in the fight against AIDS. Just disgraceful. They have no idea what truly good works are or the men they belittle.

Bono would shake hand with The Devil https://t.co/pRzQ38YzkY[7]

Bono is a POS.