We all remember what happened when the Harvey Weinstein scandal broke. It was right around the Las Vegas shooting and leftists were particularly upset with the NRA because thinking isn’t always their strong suit.

Anyway, the media reveals that Weinstein is a pig who sexually assaults women in exchange for roles in his movies. Weinstein, in a desperate attempt to deflect attention, begins going after the NRA. I guess he did this in hopes that liberals cared more about that than about his misconduct. He was wrong.

Now actor Kevin Spacey appears to be making a similar move. After it was reported that he became inappropriate with child actor Anthony Rap at the age of 14, he issued an apology where he also came out as gay. Is this a distraction technique, or a way to garner sympathy from the LGBT community, who would come to his defense?

In any case, it’s not working.

Now that the cat is out of the bag on Spacey’s sexual misconduct, several people are coming forward with similar stories of his handsy nature.

Several women tweeted out their experiences with Spacey, which almost all included a younger male friend/relative being assaulted by the actor.

And one of the more prominent tweets came on the 13th of October, 2 weeks before Spacey issued his shocking apology. 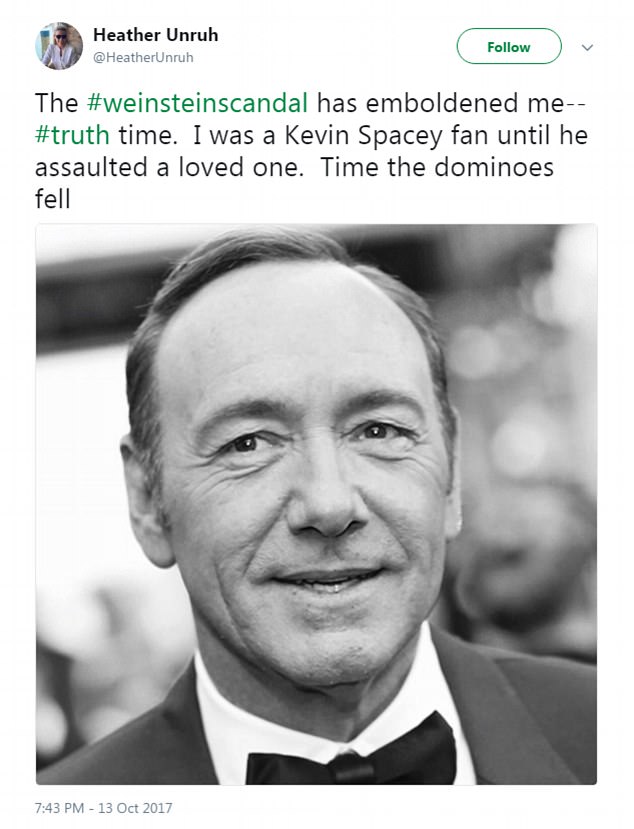 While Heather Unruh refuses to give any additional details regarding her accusation, she did say that her “intent was to encourage a badly needed investigation and conversation” which she accompanied with the hashtag #It’sNotOK.

Unfortunately, it appears as if this is only the beginning for Spacey. What was an outstanding career is now going to be tanked by his own sexual misconduct and I can’t say I’m surprised or disappointed. Weinstein became the catalyst that is going to hopefully be the end of all of the Hollywood degenerates who take advantage of those in need of a job. Not only is this the beginning of the end for Spacey (which we know because of his ominous Twitter statement say “I know that there are stories out there about me and that some have been fueled by the fact that I have been so protective of my privacy”), it’s the beginning of the end for a whole lot of big named actors, directors, producers and the like. There is a lot of nasty stuff going on behind the silver screen and it’s about time that it be revealed for the world to see. Those in Hollywood have a tendency to act like they’re better than everyone else, but the truth is that they’re just hypocrites who have learned how to talk out of both sides of their mouth on “women’s issues,” “feminism” and other such topics.