Uh-Oh! Former Fan Of Jim Carrey Sells His Ex-Hero’s Picture On Ebay So He Can Buy A Gun

Jim Carrey made news this week for calling gun owners “Heartless Motherf&ckers”[1] just one day before he admitted that he had an armed bodyguard[2]. This was on top of his outdated, widely panned video making fun of people who care about the 2nd Amendment.

Jim Carrey’s digs at gun owners didn’t set well with one of his former fans, who decided to turn the tables on Carrey by selling his autographed photo to raise money to guy a gun. 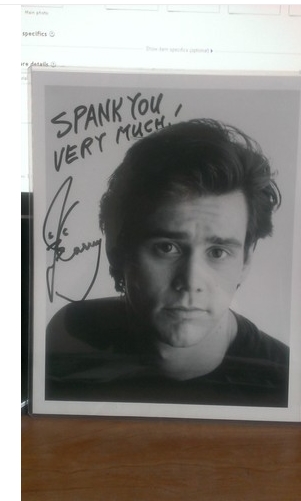 I’m selling this Jim Carrey Autographed B&W 8X10 Photo (mint condition) in hopes that I sell it for enough to buy a GUN to protect my family.

I’m thinking of getting the Glock G30S .45 ACP Pistol which retails for $640 U.S. Hopefully I can get at least that much for the autographed photo. If it sells for more than I’ll get a laser sight for it and take some gun safety classes and get my “concealed carry” permit.

I lost all respect for Mr. Carrey after he released his “Cold Dead Hands” video mocking responsible gun owners and Charlton Heston.

I believe in the 2nd Amendment and my rights shall not be infringed! From MY cold dead hands Mr. Carrey!

So far? There are 93 bids and Carrey’s autographed picture is up to $510 with more 5 days to go. Given the blistering pace of the bidding, it looks like his former fan may get his Glock G30S .45 ACP Pistol after all!