Well, that’s five minutes and five seconds[1] of my life I’ll never get back. The skit by Alec Baldwin for Saturday Night Live lampooning both Bill O’Reilly and President Trump was just abhorrent. Frankly, it was awful and not in the least funny. Since Baldwin has joined SNL, I have learned to loathe him. The allegations he throws at O’Reilly border on slander in my book. Not one sexual harassment allegation has been backed up by any proof whatsoever… but that doesn’t stop the left from running with the ball. I didn’t see them do this to Letterman who literally got caught with his pants down.

I disagree with O’Reilly A LOT. But all I’ve ever heard out of the industry is that he is very professional and that he is a good man. He’s also one of the leading conservative voices out there and a prime target for leftists. On the $13 million paid out… I have no idea if that is correct. But I will say this, the rich and famous many times settle a lawsuit just to make people go away. It is not an admission of guilt. Baldwin loves making fun of Donald Trump and now O’Reilly. His impersonations suck and I mean that. 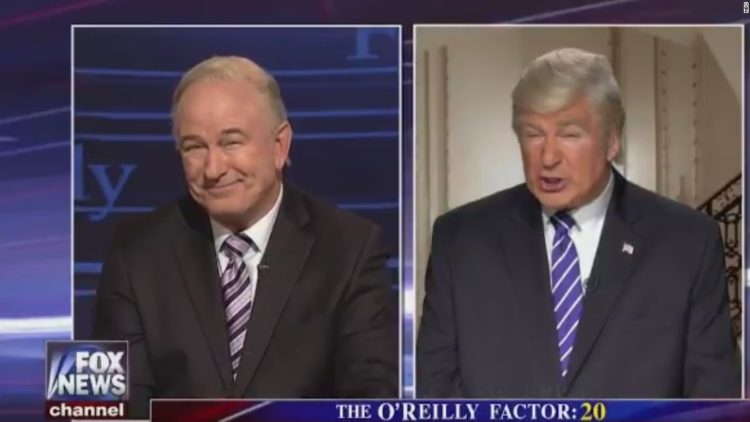 Alec Baldwin returned to pull double duty as both O’Reilly and Trump on this weekend’s episode of “SNL,” hosted by comic Louis C.K. Trump appeared as a guest on “The O’Reilly Factor,” which has seen advertisers flee after the New York Times spotlighted five separate allegations of sexual improprieties and other inappropriate behavior that have resulted in $13 million in monetary settlements.

“As you know, 60 of our sponsors have pulled their ads from the program. No word as to why yet,” Baldwin’s O’Reilly says, before introducing ads for “Dog Cocaine” and Eliquis, described as “Cialis for horses. Get your horses boned up and see what happens.”

He addresses the controversy by saying, “Apparently several women have come forward and accused me of offering them exciting opportunities here at Fox News,” before bringing on Trump, a “man who is unimpeachable on all female issues.”

Baldwin is insinuating that both men are perverts and defending each other. He should know… somebody ought to parody Alec Baldwin. His puns are disgusting: “I’m more familiar with this case then I am with say healthcare, but I didn’t really look into it, no. I was too busy being super presidential by bombing a bunch of (bleep),” Trump says. “I’d like to thank you for promoting Sexual Assault Awareness Month,” O’Reilly says. “It’s a subject that’s near and dear to my hand,” Trump says.

What a vile and hateful person Alec Baldwin has turned into. And the media Marxists are eating this crap up. Baldwin even made fun of O’Reilly’s book: “It’s about having great morals and values,” Baldwin’s O’Reilly said. “And it couldn’t have come at a better time.” I’m sick to death of these leftist hypocrites. Baldwin is a wife and a child abuser.[4] He has the nerve to get up there and make fun of those who have not been convicted of wrong doing. He should take a long hard look in the mirror[5] and then listen to his recordings of screaming at his daughter and calling her a ‘rude thoughtless pig[6]‘ as a refresher course on hypocrisy.