Video: Star Chris Pratt Teaches His Son To Say The Pledge Of Allegiance

A lot of celebrities take pride in hating America, but there are a few good ones out there. One of them is apparently Chris Pratt, who taught his son how to say the Pledge of Allegiance in this adorable video for Memorial Day. 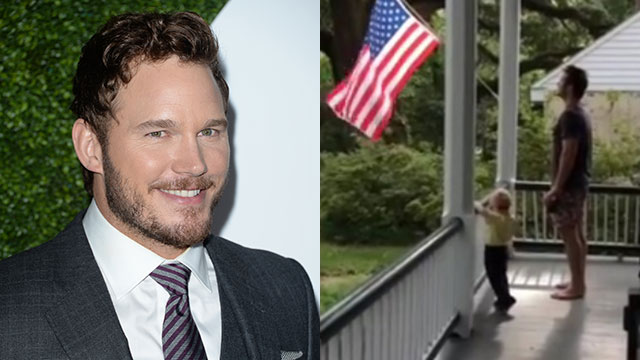 Meant to post this on #MemorialDay but I was in China and my phone wasn't working. I'm proud to be American. I'm blessed to get to travel the world! #IPledgeAllegiance

It’s never too early to learn the Pledge of Allegiance, and Chris Pratt’s son Jack has it down pat.

Pratt shared a video on his Facebook page showing he and 2-year-old son Jack reciting the Pledge of Allegiance in honor of Memorial Day.

In the video, the two stand on a front porch facing a flag while Pratt recites a line from the pledge, followed by his son who adorably repeats each line. Once they’ve finished, the two formally shake hands, officially cementing it as the cutest Pledge of Allegiance in all of history.

Once upon a time, celebrities were proud to be Americans, even giving up their Hollywood careers to serve in the military with pride — now, it’s more likely to see a celebrity attacking the military or insulting the United States. So seeing a major star like Chris Pratt post a video like this is beyond refreshing. If only more celebrities would follow his example.