Getting to interview your idol is exciting enough for most people. But Dwayne “The Rock” Johnson decided to give one superfan the surprise of his life instead. 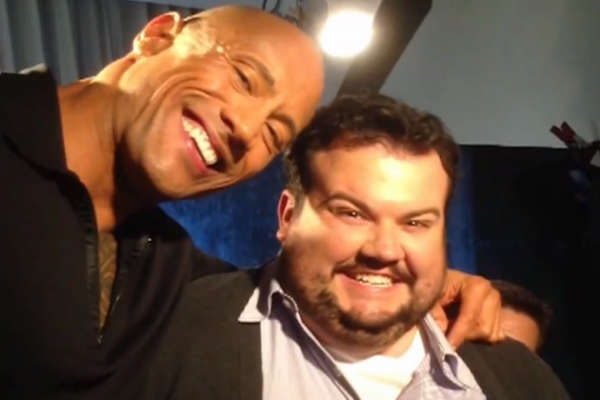 The comedian, a fan of Dwayne “The Rock” Johnson since his childhood, was sent by Screen Junkies to interview his idol about the actor’s new movie “San Andreas.”

He was in for a “life changing” surprise.

When Mundy arrived, he was told that the previous plans for the interview had been scrapped and that they would need to come up with a new proposal. What he didn’t know, was that The Rock intended on denying all their suggestions.

“I just feel like we just dropped the ball,” the man said after The Rock’s agent rejected their ideas.

Despite the shoot being canceled, Mundy’s friend kept recording, insisting the comedian do a standup shot in the hallway. That’s when The Rock suddenly opened the doors behind him.

“What?” Mundy asked in disbelief.

Things only got crazier. Johnson had secretly worked with Mundy’s fiancée and friends to setup a wedding — one that he would officiate.

“Listen, come on in,” The Rock told Mundy as he ushered him inside a room. “I’ve got a little surprise for you. And here’s when you thought the day was going to be terrible. And actually, it’s going to be the greatest day of your life. Come on in.”

As Mundy walked inside, he saw family and friends waiting to greet him. It was clear the scene was set for a wedding.

The Rock then walked Mundy down the aisle before marrying him and his bride. Talk about the wedding of a lifetime!