You know who is a STEAMY DUMP?[1] AMY – freaking – SCHUMER. She’s now trying to shame everyone into voting. Telling people that if they don’t vote, everyone on the Internet will know. You know what, Amy? Who cares? It’s none of your damned business or anyone else’s whether someone votes or not. If this woman could, she would try to force every person out there into voting for Hillary Clinton… a woman very close to being under indictment for her massive corruption. But you see, Schumer doesn’t care about that… but if you don’t vote? Hell, off with your head! What an unfunny troll this woman is.

Watching this waste of a comedian just makes my blood boil… and I’m not a Trump supporter. I’m just a Schumer hater. It is a person’s right to vote or not. Everyone has a reason to vote or not to and Amy doesn’t have any right or standing to tell people to vote or else. She can stuff it as far as I’m concerned. While she’s threatening everyone if they don’t vote, she of course slurs Trump, because Hillary. Please spare us all the lecture and get over yourself… if you can. 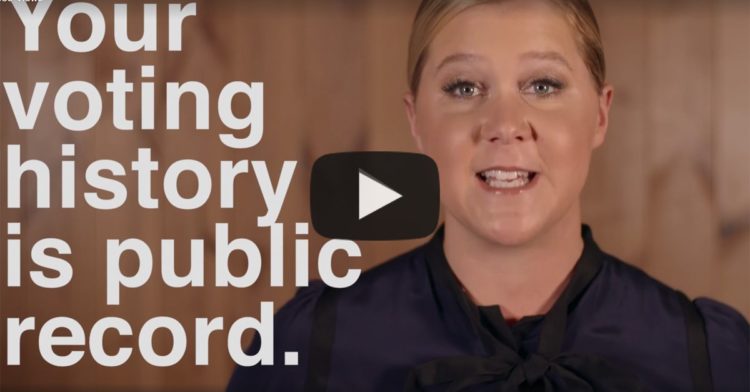 Oh Amy Schumer. Just when I was feeling overwhelmed from the tsunami of Hillary scandals, along floats Amy. Little floaties on her “cute” chubby arms and all. Methinks they’re speckled with penises. I’m not even going to pretend this new Episode of Amy Says Stupid Things doesn’t tickle me hot pink. Because it does. I have a real love of Amy and all her preachy, unfunny ways (see Uh Oh! Bud Light Pulls Amy Schumer, Seth Rogen Ad Campaign After Sales Drop[3] and CANNIBALISM: Leftists Turn on Darling Amy Schumer for ‘Racist’ Parody Video![4]).

What’s Amykins up to now? Hillary Clinton Surrogate. Now she’s internet shaming you for not voting…

Get it? Schumer doesn’t care “who” you vote for. But if you don’t vote, you’ll have your personal records exposed because Amy and her supporters are jerks like that. I mean, they’re jerks who don’t pay much attention in the first place. So, expecting them to show initiative to look up your personal information is a stretch. A stretch rather like calling Amy “funny.” Or what her pants experience daily.

Amy wants you to vote, just not for Trump. If you do, she’ll sic her minions on you… I kind of doubt that. They’re too busy sniping at others and being ‘cool’ to care.

For heaven’s sake don’t bother paying attention to Hillary Clinton lying her freaking head off about emails, Benghazi or just about anything else. She’s only under three investigations currently by the FBI. Instead call her opponent names and threaten voters. That’s a hell of way to get out the vote, Amy. Just because Hillary has a vagina, doesn’t qualify her for the presidency. But her corruption surely qualifies her for jail.