When did late night hosts become the moral compass of America? I thought they were supposed to make us laugh, no matter what side of the political spectrum you are on. But it seems like they are getting more and more preachy about leftist causes and outright ignoring ones[1] that look bad for Democrats. Look no further than Stephen Colbert: Late Night Hack Extraordinaire. This guy used to be on top of the world, but now he has relinquished the top spot[2] to Jimmy Fallon. 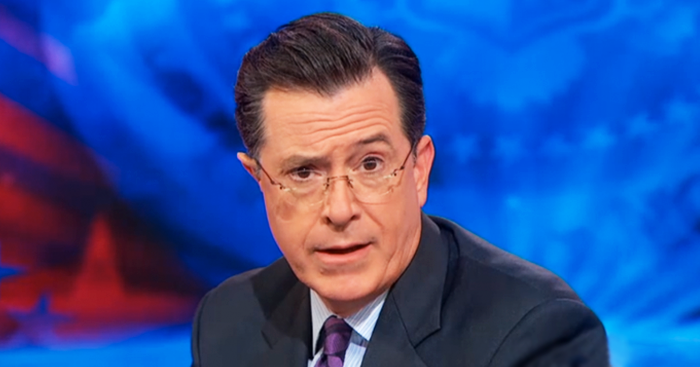 He tried to immediately politicize the shooting that happened over the weekend on his show. It immediately backfired.

“You wanna do something, but nothing gets done. No one does anything,” he lamented on Monday night’s Late Show, referring to the massacre in the San Antonio, Texas area that took over 25 lives.

What would he like to be done? Ban all guns? Because that’s the only solution that would have a shot at working. Even though we all know that criminals aren’t deterred by laws, right?

“Nothing gets done to control the guns that kill 10,000 people a year around America—not just in these mass killings. Five thousand years ago if your village had a tiger coming into it every day and was eating people, you wouldn’t do nothing. You would move the village, you would build a fence, or you would kill the tiger,” he continued.. “You wouldn’t say, well, I guess, y’know, someone’s going to get eaten every day because the price of liberty is: tigers.”

Funny, if these imaginary villages had guns, they wouldn’t have a tiger problem. But he is overtly campaigning for the Progressive cause now, he can’t think with his brain. He is told what to say by the progressive overlords and that’s that.

Colbert on guns: “If your village had a tiger eating people every day, you wouldn’t do nothing.” https://t.co/Wg0KQQcflz[4] pic.twitter.com/iz5ARYiiTR[5]

Everyone else in the world picked up on this as well.

I'd probably get a gun and shoot the tiger https://t.co/JZjhoIXqXL[8]

You'd use guns to shoot the freaking tiger jackass
Then maybe use the chainsaw attachment to chop it up???? https://t.co/7tm0Iuqwwh[11]

Uh you’d hunt the tiger with guns, not ban tigers or the guns to shoot it with

This is the worst metaphor ever.

Uhhh, I'd use one of my guns to shoot the freakin tiger….lol https://t.co/xSHXPrMHSR[15]

This is just another example of the left thinking that guns are animate objects with instincts to kill, like a tiger. They just want your guns and are out and loud about it now. We need to stick to our guns (pun intended) and never give an inch on the 2nd Amendment.