Rapper-turned-country-singer Kid Rock has triggered snowflakes around the nation with the idea that he may be running for Senate in Michigan and he hasn’t stopped.

He recently gave what could arguably be considered a campaign speech in Grand Rapids, Michigan, which all but cements the idea that he is going to be running for political office some time in the near future.

That, or we’re all being Punk’d on the largest scale the country has ever seen. I can’t say I would be upset with either outcome. 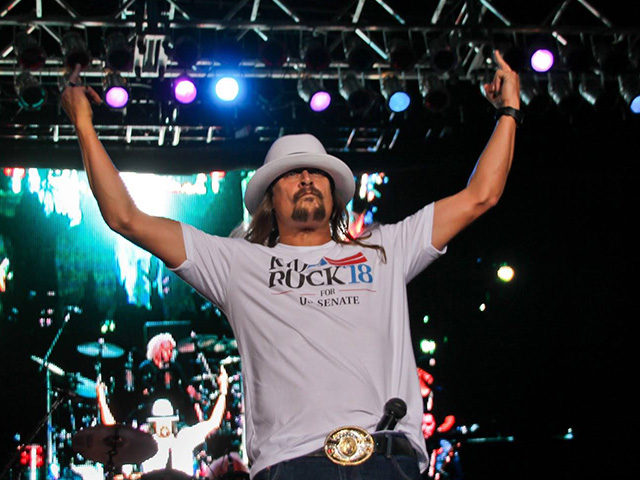 On Tuesday night, Kid Rock unleashed a speech the likes of which the world has never seen and it was AWESOME!

During his warm up, he was wearing an American flag scarf while “Hail to the Chief” played over the speakers. Then he launched into what many are calling a “stump-style speech. In it he lambasted “f*cking bigots,” “deadbeat dads” and the KKK, letting the hate group know that their support (if any) is not welcome.

He also blasted the idea of “redistribution of wealth” which will undoubtedly be used by Democrats and liberals to “prove” that “rich, white men don’t care about anything but money,” which is a falsehood they have been attempting to push for years now.

“And I don’t believe you should save, sacrifice, do things by the book, and then have to take care of some deadbeat, milking-the-system, lazy-ass motherf*cking man,” he said to applause.

Rock then took on a very touchy issue: single motherhood. “Of course we should help them out, I don’t want to sound like a jerk,” he said. “But let’s help them out with childcare, job creating, and put their goddamn asses to work!” Single mothers (and people in general) should not be supported by a government who is only interested in turning them into baby machines. And furthermore, what kind of example does it set for your child who sees their only parent and role model refusing to do whatever they can to support them?

On deadbeat dads (a contributing factor to single motherhood), Rock made his stance extremely clear: “I say lock all you a**holes up and throw away the f*cking keys!”

He then took on some of the hottest topics of the time: The KKK, BLM and Nazis.

“And if you want to take a knee, or sit during our Star-Spangled Banner. Call me a racist ’cause I’m not PC, and think you have to remind me that black lives matter? Nazis, f*cking bigots, and now again the KKK? Screw all you assholes, stay the f*ck away,” he shouted.

And right before he started playing his music, he threw out a juicy tidbit that is sure to have liberal whinebags running for their safe spaces.

“Now let’s get down to brass tacks, before I hit you with this funk,” he said, winding down his speech. “Like it or not, Hillary Clinton lost, and your president is Donald mother*cking Trump. But if Kid Rock for Senate has got folks in disarray, wait ’til they hear Kid Rock for President of the U.S.A.!”

Would you like to see a President Kid Rock?