Is it just me[1], or does Cher look sauced all the time? Maybe I just see her at bad angles, but she doesn’t look or sound all there to me. Now, she’s screaming about hell and the apocalypse because Trump has been elected President. She’s ranting that we are all going to lose our rights. Well, where the hell were you Cher when Obama was stomping all over our rights and driving healthcare costs through the Stratosphere? Were you at one of Obama’s parties living it up? It doesn’t matter whether you like President Trump or not. What matters is what he does for the country. And so far, I think he’s doing a great job. So just shut it already.

Of course, CNN was all sympathetic to Cher. Biased doesn’t begin to cover it with them. They started a new segment yesterday called “American Women.” How original. I’m sure it’s to build off that horrid Women’s March that the leftists put on with Ashley (nasty) Judd and Madonna (I want to blow up the White House). They had all kinds of feminists there including Donna Hylton[2], a black feminist radical who served 27 years for the kidnapping, torture, rape and murder of a white gay man in Manhattan. She’s buds with Van Jones. Nice group y’all got there… radical, violent extremists and you have the nerve to lecture us on morality? Get real. 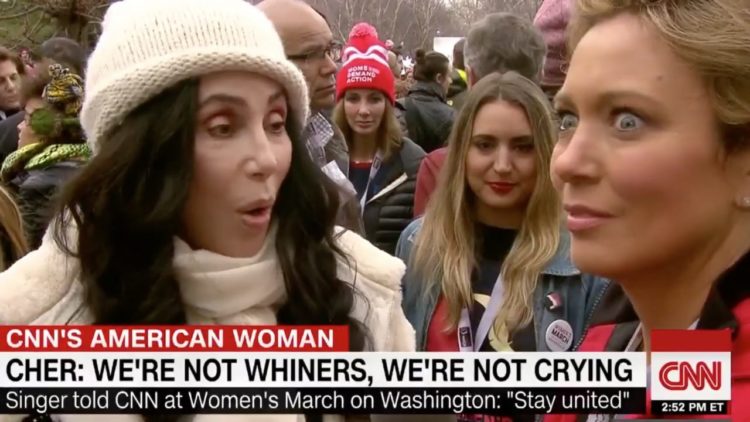 Baldwin then asked her why it was that women came out for the protest after it was too late, after Trump had been elected.

I campaigned a lot and a lot of times with students, I said, ‘if you don’t exercise your right and responsibility, you’re gonna see a hell like you never dreamt. And you’re gonna lose your rights. Your rights that you take for granted.’ But they weren’t scared enough.

“They thought that it wouldn’t make any difference,” she added sadly.

The singer then offered her personal assessment of Trump, adding, “I just don’t like him. I really just don’t like him and I don’t respect him. I’ve never heard anybody who lies like they’re telling the truth. He’s really good – he deserves an Academy Award.”

Cher finished by saying it’s not worth talking to Trump because he doesn’t have a moral compass.

Fellow celebrity Whoopi Goldberg criticized the march[4] for banning pro-lifers from the demonstration. [5]The “Woman’s March” was one of the larger protests at Washington D.C., but was upstaged by the Trump seizing the headlines and swinging the coverage to the White House instead.

“It’s one thing to lift your voice to actually physically come to Washington, Cher, why?” Brooke Baldwin asked. “Because I want to support the people now who will have no voice and that will be walked and stepped on and all of our rights will be taken away from us. We’ll go back to the fifties. If they have their way we’ll go back to a time where we didn’t have we had no rights. And how can we go backwards? I can’t go backwards.” Frankly, the fifties was a great time compared to now, but that aside, what Cher is saying is just another leftist talking point, an outright lie. No rights have been lost under Trump in the week he’s been in office. And if anything, we’ll have more under Trump than a Marxist like Obama.

Cher says she knows what it is to have nothing and to struggle… she has forgotten what that is like. She is a sheer elitist these days who doesn’t get what it is to not have a job or a way to provide for your family. She has no idea what morals or faith is all about either. Cher claims to speak and protest for women’s rights… not my rights you don’t. You have no idea what a normal American is or how they live. CNN and Cher were made for each other and they are both irrelevant.