Chelsea Clinton has been stepping more and more into the public eye ever since her mother’s humiliating loss in November. She’s been more vocal on Twitter, she’s been featured in media puff pieces and now, she’s evidently writing a children’s book. But the title is bound to make you laugh[1]. 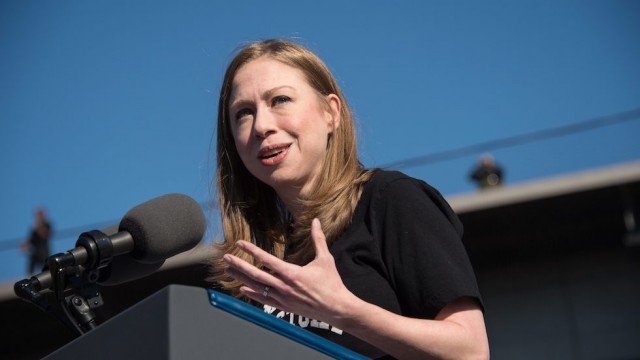 If anyone is keeping count (I am) – this is the 16th Chelsea Clinton story published by @thehill[3] since January 23. https://t.co/l8M8Kxqhos[4]

Here is every 2017 tweet from @thehill[3] that includes the words "Chelsea Clinton." pic.twitter.com/PuLQlSmPjf[7]

So it’s no surprise that The Hill is already hard at work promoting Chelsea’s book.

How many does this make, @neontaster[9]? This is insane.

The Hill should have their own Chelsea Clinton section. https://t.co/qW2i15TFh5[10]

That’s right: Chelsea’s book is going to be titled “She Persisted,” in a cheap effort to capitalize on the feminist rallying cry after Sen. Elizabeth Warren was silenced by Republicans for violating floor rules. 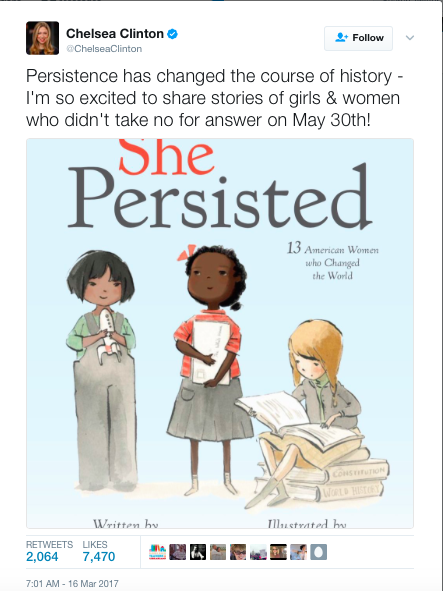 The book will include stories of prominent women throughout history, most of them liberal, such as Helen Keller, Nellie Bly, Clara Lemlich, Ruby Bridges, Sally Ride, Florence Griffith Joyner, Oprah Winfrey and Sonia Sotomayor. There’s one more woman who will be added and she hasn’t been named yet, but it should be fairly easy to guess who that last woman will be.

“I wrote this book for everyone who’s ever wanted to speak up but has been told to quiet down, for everyone who’s ever been made to feel less than,” Chelsea said in a statement. “The 13 women in She Persisted all overcame adversity to help shape our country—sometimes through speaking out, sometimes by staying seated, sometimes by captivating an audience. With this book, I want to send a message to young readers around the country—and the world—that persistence is power.”

Of course, the reality is that this book is just another ploy to get herself further into the public eye, likely in an attempt to segue into a political career.

Will you buy Chelsea’s book?