Whoo boy![1] Here we go again. What better way for the President to start Sunday morning than with a tweet that royally pokes the media badger. There is a video (see below) of Trump beating up Vince McMahon of WrestleMania fame. Someone on Reddit doctored the video so the CNN logo was superimposed on his face and Trump ran with the video showing him beating up CNN. I have no words.

I’m not sure whether to be appalled or laugh. Of course, CNN’s Jim Acosta wasted no time in slapping back, tweeting, “Isn’t pro wrestling fake?” — to which Donald Trump Jr. retorted, “Yes, just like your coverage.” Guess he’s not pulling any punches where the media is concerned. I know… groan. I can’t help myself. You’ve got to admit that was an awesome comeback though by Trump Jr. But geez. Chelsea Clinton thought she would be clever and tweeted: “July 2, 1776: Continental Congress votes for independence July 2, 2017: Trump auditions for @WWE.” Fail… at least she got the date right. 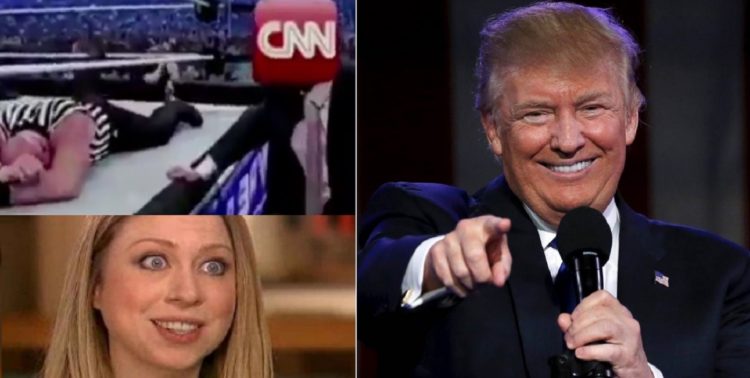 President Trump’s latest weapon in his battle against “fake news”: a fake fight.

Trump kicked off his Sunday morning by tweeting a doctored, looping 10-year-old clip of himself pummeling Vince McMahon at WrestleMania 23 — only with the CNN logo slapped over the WWE CEO’s face.

He captioned this literal embodiment of his assault on the media with the hashtags “#FraudNewsCNN #FNN.”

The official @POTUS handle proceeded to retweet the video, a version of which had been posted to Reddit[3] four days earlier by the user “HanA–holeSolo.”

This happened the day after Trump was debating on “changing the name #FakeNews CNN to #FraudNewsCNN!” and insisted his use of social media was “MODERN DAY PRESIDENTIAL.” Uh yeah. I can understand all this and part of me even snickers at it, but I can also see how the left will attack it from the ‘violence’ angle. It makes me cringe. And here it comes: “It is a sad day when the President of the United States encourages violence against reporters,” CNN said in a statement (unlike the media who encourage violence against Republican congressman and a sitting President). “Clearly, Sarah Huckabee Sanders lied when she said the President had never done so.”

And unfortunately, there’s more: “Instead of preparing for his overseas trip, his first meeting with Vladimir Putin, dealing with North Korea and working on his health care bill, he is instead involved in juvenile behavior far below the dignity of his office. We will keep doing our jobs. He should start doing his.” This all comes after Trump got into it with “Morning Joe” co-host Mika Brzezinski and her husband-to-be, Joe Scarborough.

And I’m not sure Trump is helping himself here, although this will be red meat to his base: “I’m President and they’re not,” Trump bragged during a Saturday night speech at the Kennedy Center meant to honor veterans. “We won and they lost … The fact is, the press has destroyed themselves because they went too far, instead of being subtle and smart.”

The video was not a smart move by President Trump. He needs to stop this… it won’t end well or go anywhere good. And frankly, we have much more pressing matters to attend to. 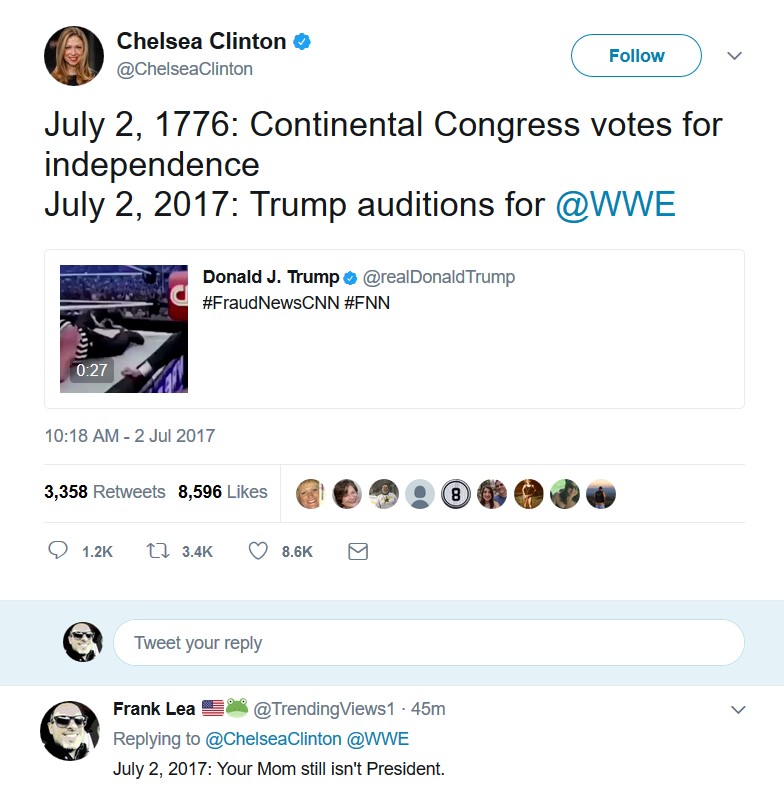