If you scratch off the surface of a liberal, you’ll usually find a Fascist underneath. These are people who believe in freedom and democracy as long as they think it favors them and the moment it doesn’t, they have few qualms about silencing their opposition via any means they can get away with.

This is why liberals like George Soros and Thomas Friedman are such great admirers of China. They view it as a benevolent dictatorship where the enlightened (like them) can simply implement their will without having all those messy votes. There are no Tea Partiers to worry about, no original intent of the Constitution to bother with, and no pesky news outlets like Fox News or Rush Limbaugh reporting inconvenient facts.

However, even if you did have a benevolent dictatorship (and China certainly wouldn’t qualify), it still wouldn’t work in this complex modern age. There may have been a time when a well educated, well meaning king could do a reasonably good job of leading a nation, but those days are long gone. We live in a rapidly changing world full of endlessly evolving specialties. It’s far too intricate and confusing for any centralized form of government to handle, no matter how well meaning or intelligent.

Even in a country like America, where you have massive amounts of freely traded information, fiercely competitive political parties, and a relatively free market, the federal government screws up almost everything it touches. In a nation like China, where freedom is in short supply and power is much centralized, the government creates disasters on a scale that even Barney Frank and Barack Obama can’t manage.

Just as they did with the Soviet Union for so long, liberals tend to ignore the inefficiency of the state and focus on its successes. But eventually, the margin of error shrinks and government gone haywire leads to disaster. Want to a see a preview of the sort of waste that will break China one day? Well then, take a look at the ghost cities[1] — whole cities built by the Chinese government with very few or even no inhabitants. For example, there’s “Yunnan University, which was built to accommodate 2.3 million students. It has 11,000 enrolled.”

This is Ordos. The satellite view is beautiful, isn’t it? 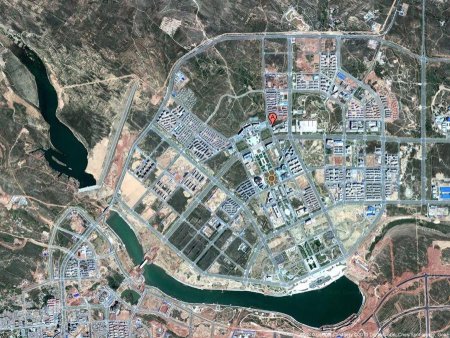 At a minimum, a city like that would cost tens of billions to build. So, how many people live there? China claims there are a million and a half people there. From the satellite view, they count a few dozen cars at the government center. That’s it. However many are actually there, it’s only a tiny fraction of the number that it can support.

Imagine all the money, manpower, and effort that went into building that city and it’s sitting there empty — rusting, rotting, and falling apart without human beings getting any use out of it. Meanwhile, China has hundreds of millions of people living in grinding poverty comparable to how people lived in this country 150 years ago.

The question isn’t when are these guys going to become a real super power; it’s how long can they hold out before their system of government leads to the bottom falling out.