Father Attends Reunion With Hired Boy To Be His Son To Protect His Own Mother From THIS Secret!

The headline sounds complicated, we know, but here’s a story worthy of it[1]. 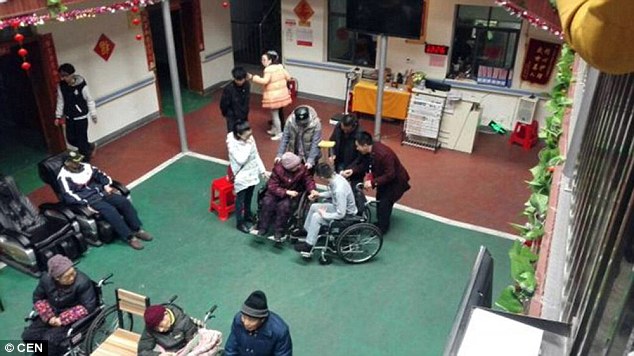 A Chinese father whose only child died of illness seven years ago has decided to use a stranger to pretend to be his son in front of his mother who believes her grandson is still alive.

Huang Xiaoyong, 56, has concealed the death of his son Huang Ge, who died in 2009, to his ill mother because he can’t bear to tell her the truth.

The family from central China’s Changsha had an emotional reunion on Monday, and Huang’s 89-year-old mother, who is going blind, did not recognise that her wheel-chair bound grandson was actually a fake, reports the People’s Daily Online.

At the age of seven Huang Ge was diagnosed with congenital muscular dystrophy and became wheelchair-bound. Doctors said he would not live a day over 18.

After he was diagnosed, together with his father they travelled the country enjoying every last moment they could.

They travelled to dozens of cities, across more than 8,000 miles. Along the way people sponsored them to travel for their courage and never giving up hope.

Huang Xiaoyong drove his son and his wheelchair around in a pedicab, and the pair were met with welcome arms in every city they visited.

Unexpectedly, Huang Ge lived for another three years until he finally succumbed to the disease.

A China Central Television programme called ‘China Top Ten People’ even had them star in the show, leaving thousands touched by their good deeds.

According to his wishes, Huang Ge’s corneas were donated after his death.

Years after his death, Huang Ge’s 89-year-old grandmother said she was getting worried about her grandchildren and wanted to see them, especially because he was ill.

She became suspicious and asked for more information. Her son lied again and told her Huang Ge could now stand up with help of a cane.

So she eventually insisted she met her grandson whom she raised.

And rather than break the sad news, the father went out looking for a volunteer to play body double, and then pulled off the ruse to avoid the truth.

The ringer he brought in had to cut his hair, wear glasses and learn to use crutches like the son would have had he survived, but he did. The grandmother didn’t have to face the tragic loss of her grandson.