HERE WE GO! Trump Found Out What China Did – Takes Matters Into His OWN Hands!

I was alarmed[1] when I heard yesterday that the Chinese brazenly seized one of our drones. The underwater drone was being used by the US Navy to test water conditions in international waters. The Chinese would not answer when we demanded they return it. It was a blatant act of war and should have been treated as such. Of course, there was no response from Barack Obama. But President-elect Donald Trump tweeted on the matter and that is all it took. Several hours after Trump said the act was unprecedented, the Chinese said the US had hyped up the whole thing and they would return the drone. Trump is not even in office yet and the communist Chinese fear him more than Obama. Refreshing.

So what does the ‘fake’ mainstream media focus on? Donald Trump misspelled ‘unprecedented’. The original tweet said ‘unpresidented’. He may have just misspelled it or auto correct on his phone may have been less than helpful. Either way, the media instead of reporting on an act of war, fixated on a spelling error. You know what? I don’t give a damn if my President can spell… I care what kind of Commander-in-Chief he is and if he is willing to fight and to fix things. The media has its collective head up its you-know-where. 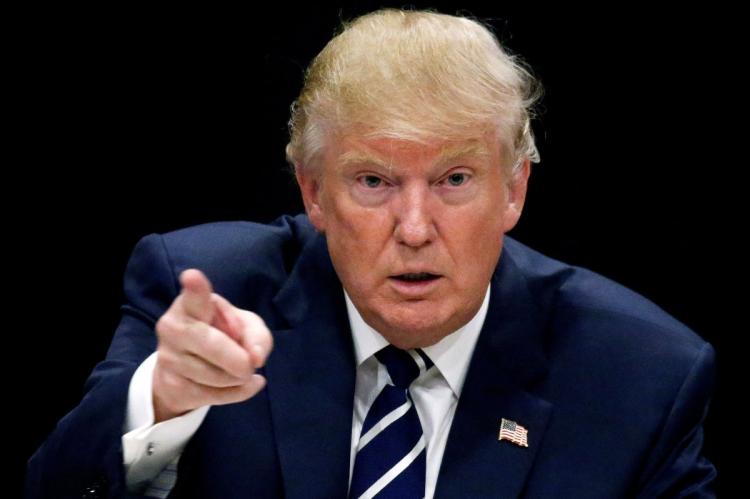 After China committed what one analyst called “an act of war,” President-elect Donald Trump entered the battle Saturday over China’s seizure of a U.S. research drone.

“China steals United States Navy research drone in international waters — rips it out of water and takes it to China in unprecedented act,” Trump tweeted, with the initial 7:30 a.m. post reading “unpresidented.” 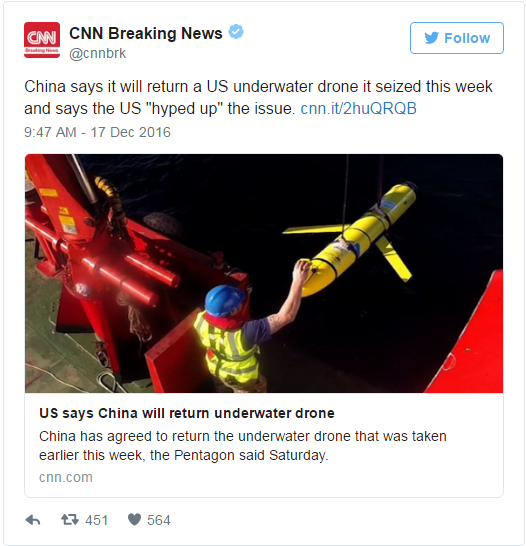 Several hours after Trump’s tweet, China announced[5] it would return the drone and said the incident was “hyped up” by the U.S.

On Thursday, as the USNS Bowditch[6] was on a research mission in the South China Sea, a Chinese naval vessel grabbed one of two research drones operated by the ship.

“The UUV (unmanned underwater vehicle) was lawfully conducting a military survey in the waters of the South China Sea,” said Pentagon spokesman Capt. Jeff Davis on Friday. “It is ours[7], and it is clearly marked as ours and we would like it back. And we would like this not to happen again.”

Davis said the Bowditch was on a mission to map an underwater channel.

The incident was not just a minor blowup, said one expert.

“This is an act of war[8] against the United States,” said Gordon Chang, analyst and author of The Coming Collapse of China, saying the theft of military property constitutes an act of war.

I’m sorry… China saying this is a ‘hyped up issue’ is just beyond the pale. If we had pulled this on them, we would be in the middle of a hot war right now. They didn’t just seize it by the way… their war ships were following our naval vessel. They waited for the drone to be lowered and launched, then they sent a crew off board to retrieve the drone in front of our Navy. The commander called the Chinese and demanded the drone back. The Chinese would not respond to that… they simply said they would continue their maneuvers.

This was either a deliberate provocation to see what we would do, or the Chinese think we are spying on them. Either way, Trump is not in the same class as Obama. Our new President-elect actually has a set and didn’t let the Chinese skate on this. I can’t believe I’m saying this, but it’s almost reminiscent of Reagan.

“Knowing Chinese military officials for many years and how orders are communicated from the highest power centers in Beijing down to commanders on the ground or water, this was very likely a highly planned and escalatory move to show China will not take matters lightly when it comes to President-elect Trump’s phone call and comments on Taiwan, or Chinese actions overall,” said Harry Kazianis, director of defense studies at the Center for the National Interest.

I agree. This was undoubtedly a test and Trump just passed it with flying colors. This doesn’t mean we won’t dance with the Chinese soon, but they know that the incoming President is not weak and will actually push back and mean it. The Global Times, which is for all intents and purposes the official newspaper of China’s Communist Party, quoted retired Chinese admiral Yang Yi as saying China had the right to take the drone. “If China needs to take it, we’ll take it. (America) can’t block us,” Yang was quoted as saying. “It’s natural for us to take possession of and research for a bit these types of things that America sends to our doorstep,” Yang said. “The louder they shout, the more their protests ring hollow.” Not so fast boys… there’s a new Commander-in-Chief in town and he’s not down with your bull crap.

By the way, Sen. Chris Murphy, D-Conn.[9] was the asshat that attacked President-elect Trump’s misspelling. Fitting, as he’s a communist in the mold of China as well. I think we know which side he’s on, thus his picking at spelling and not an act of war.