This Church Just Put The ‘Religion Of Peace’ In Its Place!

Personally, I love this sign![1] What’s wrong with it? It’s not hateful to speak the truth… Allah is not our God and Mohammad is not greater than Jesus. There, I said it and it’s true as far as I’m concerned. In my reality, there is one God and it sure as heck isn’t Allah. CAIR and the Ummah are lining up with hate over the sign and declaring it a sign of bigotry. No, what Islam does and promotes is the very definition of hate and bigotry. This is a declaration of Christian faith and it is guaranteed under the Constitution as our right. Muslims are allowed to say what they like about Christians, so why can’t we proclaim our belief in God as well? We have freedom of religion as Christians… at least for now.

HOOD RIVER, Ore. — The view of Mt. Adams from the Belmont Drive Missionary Baptist Church is beautiful, but many say the messages outside of the church are down right ugly.

The reader board now displays two messages. The first reads, “Wake up Christians. Allah is not our God. Muhammad not greater than Jesus.” The second says, “Only the bible is God’s word. “Holy book.” Koran is just another book.””

“I literally had to stop and back up and make sure I saw what I saw and I was profoundly offended and upset by it,” Eric Cohn said.

Cohn, a Hood River resident, first spotted the message while he was out for a bike ride. He couldn’t believe what he was reading, and he isn’t the only one.

“I was really annoyed and sad,” Hood River Mayor Paul Blackburn said. “I am annoyed that in this political season there’s a solid case of ugly going on. I think it norms up this kind of behavior like ‘oh it’s okay to be a bigot now.’”

Again, I see nothing wrong with this. To me personally, the Koran IS just another book. To a Muslim, the Bible is just another book. Double standard here much? Pastor Michael Harrington is now defending the messages he put on the sign. He says everyone is over-reacting. And he’s right. “I’m not politically correct. I’ve never been politically correct, but I think I’m biblically correct and that’s what matters to me,” Harrington said. And that is what should matter to every Christian out there. Harrington doesn’t plan to take the messages down until the first of the month, when he was planning to put new messages up anyway. He says anyone is welcome to come by his church to discuss the matter over coffee and doughnuts. He’s a kinder and more Christian person than I am… I would tell them where they could stuff those donuts if they didn’t like the sign. 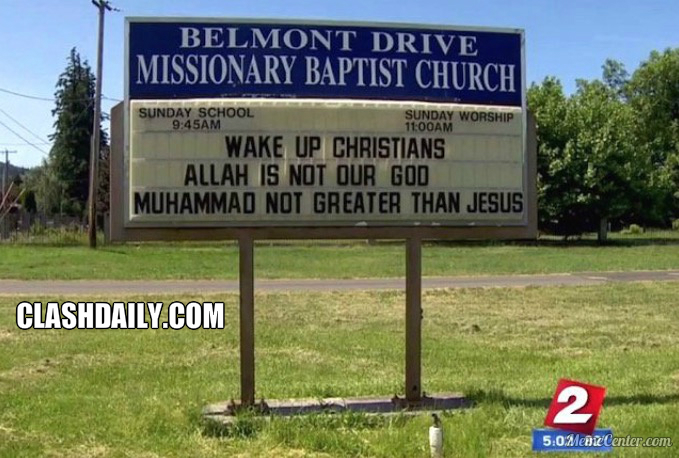