I have long considered[1] Don Lemon to be a leftist hack. At least I’m not disappointed. He recently led a panel that was discussing religious liberty and what he perceives as discrimination against transgenders and gays. Not only did he misquote the law twice, he stated: “Religious liberty — is that just a code for discrimination — I don’t want to provide services to certain people? Isn’t that just a code?” No, you putz. It’s called the First Amendment… it’s called constitutional rights. We have a right to freedom of religion. You don’t have a ‘right’ to go into any restroom/locker room/shower you want because you are confused about what is in your sock drawer. What a buffoon. The Mississippi Senate voted Wednesday to pass a religious freedom bill. The legislation, named the Protecting Freedom of Conscience from Government Discrimination Act, prohibits government from punishing businesses, social workers and public employees for denying services based on the belief that marriage is between a man and a woman. The bill also protects those who believe gender is determined at birth. Not on how you feel that day. 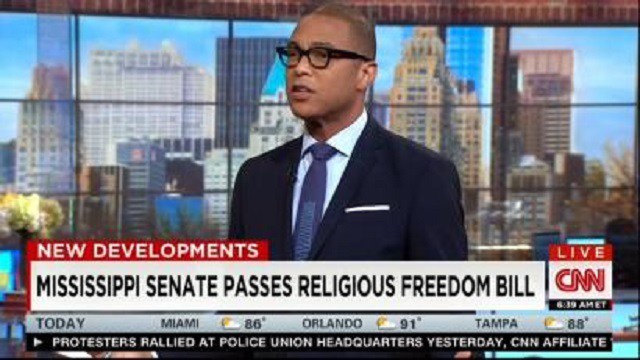 CNN’s Don Lemon acted more like a socially-left activist than a journalist on Friday’s New Day, as he moderated a panel discussion on a proposed religious liberty law in Mississippi. Lemon twice misrepresented what the law actually says, and asked a LGBT activist, “Religious liberty — is that just a code for discrimination — I don’t want to provide services to certain people? Isn’t that just a code?” He was more explicit later in the segment: “People in certain professions…wouldn’t have to serve certain people — which, at its base, is discrimination.”

Anchor Alisyn Camerota teased the discussion by hyping that “a new religious liberty bill in Mississippi sparking outrage — some critics call it the most discriminatory measure ever written. It targets gays and lesbians.” Lemon, acting as a substitute anchor for Chris Cuomo, turned to the Family Research Council’s Peter Sprigg and Rob Hill of the Human Rights Campaign’s office in Mississippi.

Lemon thinks the bill will have sweeping anti-LGBT repercussions for the United States. He doesn’t give a rip about protected religious freedom. The only discrimination I see here pretty much is against white Christians by a biased-media troll. Lemon and his buds were saying this bill targets gays and lesbians. It doesn’t do that at all. What it does is it prevents the government from targeting people who hold those traditional beliefs for some sort of punishment or retaliation through government action. Section 3 of the proposed Mississippi law reads:

The sincerely held religious beliefs or moral convictions protected by this act are the belief or conviction that:

(a) Marriage is or should be recognized as the union of one man and one woman;
(b) Sexual relations are properly reserved to such a marriage; and
(c) Male (man) or female (woman) refer to an individual’s immutable biological sex as objectively determined by anatomy and genetics at time of birth.

Lemon is using his position as a journalist to advocate for gays and transgenders. What ever happened to objectivity? Just reporting the facts and leaving your own viewpoint and politics out of it? Lemon should be ashamed for lying and skewing the law the way he did. He’s an activist with a bully pulpit. And people wonder why no one watches CNN.