EVERYONE Is Talking About What Melania Trump Just Asked the Pope 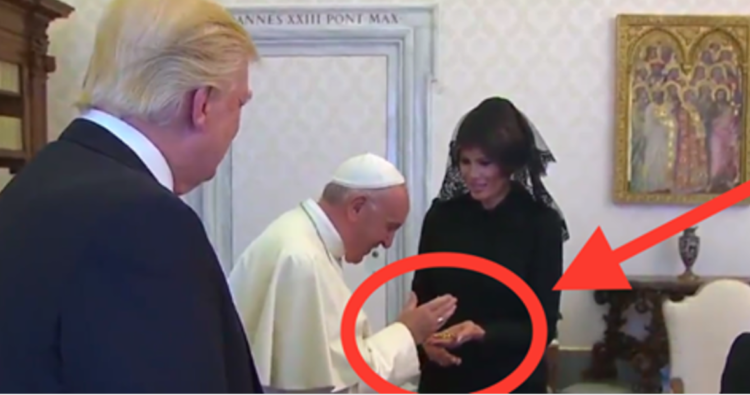 On Wednesday, President Trump along with his wife, First Lady Melania, as well as his daughter Ivanka, met with Pope Francis at the Vatican. This marks the first official visit of the current President to the Vatican. Especially in recent years, sitting Presidents have both visited the Pope in the Vatican and have received the Pope when he visits the U.S. Last year, during the campaign, the Pope suggested that Trump was “not Christian[2]” because of his push to build a wall.

The meeting went smoothly enough, but audio recorded is a little too thin to tell exactly what the Pope said to Melania that made her laugh as they shook hands. Melania probably wanted to be on his good side, because she asked the Pope to perform one favor right afterwards.

The First Lady had brought her rosary, a traditional Catholic beadwork loop that is useful for leading prayer both in groups and personally.

It was all over quickly, but Melania asked the Pope to bless her rosary, which he did while she held it, smiling, in one hand. After blessing the rosary and making the sign of the cross, Melania thanked him and clasping it in her hands, she moved back into the single file lineup for the photographers to continue taking photos of the occasion.

As reported in the Independent Journal Review[6]:

Melania is openly religious and a practicing Christian. President Trump and Melania Trump are regular attendees of an Episcopalian church in Palm Beach, Florida. Melania often posts about her visits to the church on Instagram. She took the first lady of Japan to her church, Bethesda-by-the-Sea, in February to show her “where we were married, where we celebrate and we pray‬.”

Just recently, the Trumps celebrated this year’s Easter at Bethesda-by-the-Sea.

In the past and during the campaign, Melania had led Trump rally attendees in praying the Lord’s Prayer.