I despise the trolls[1] from the Freedom From Religion Foundation. They have made it their cause in life to go around and have anything to do with Christianity removed from any place or thing that falls under the federal or state governments. Their latest target is Longwood City Hall in Longwood, Florida. They are claiming a cross honoring Vietnam Vets violates constitutional law and the separation of church and state.

The cross used to be part of a traveling Vietnam War memorial. The mayor there says it will stay in honor of military vets and basically told these atheists to get stuffed. Good for him. The leader of the Freedom From Religion Foundation claims to have many military members. I doubt they have many at all. I’ve watched these jerks go all over the country trying their darndest to get rid of all signs of Christianity wherever they can. They really, really hate Christians. 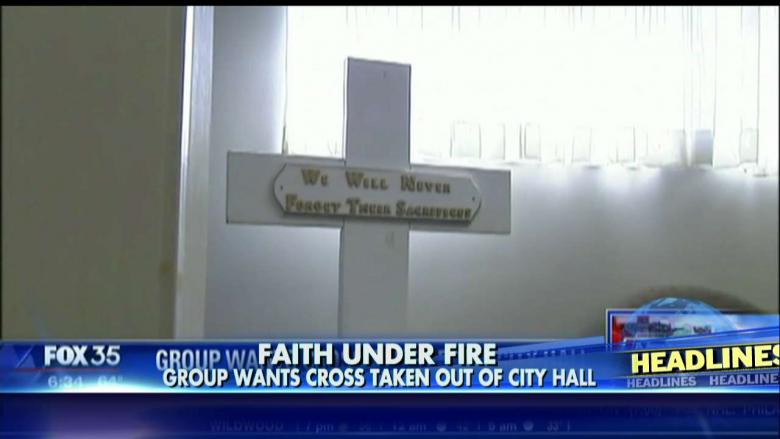 An out-of-state group is demanding a Florida city remove a cross from city hall that stands as a tribute to veterans.

The wooden cross inside Longwood City Hall bears the words, “We will never forget their sacrifices,” and used to be part of a traveling Vietnam War memorial.

The Freedom From Religion Foundation, however, argues the Christian symbol should not be in a government building.

The Wisconsin-based group, which says many veterans are members, says the tribute could just as easily be placed on a non-religious statue or picture.

Longwood Mayor Joe Durso is not backing down.

“It’s a historical honor that was bestowed on those folks, so we believe it has every right to be in city hall,” he said, adding that the cross was donated to the city by a local veteran.

The cross used to have on it the helmet of a fallen soldier. It honors those who died trying to protect all of us. City Hall is an appropriate place for the display regardless of what these protesters say or think. “It gives the impression that the city is endorsing Christianity by having that cross there,” says Richardson, “they could just as easily have that saying on a silhouette of a soldier or something like that, and that wouldn’t endorse Christianity.” See what I mean? This whole separation of church and state nonsense is an attack on Christianity… nothing more, nothing less.

“We absolutely believe the cross should stay in City Hall,” Durso says, “it was really a generous donation from a veteran who lives in the City of Longwood.” The mayor calls this a tempest in a teapot. It’s actually far more than that… it’s an attack on Christians.