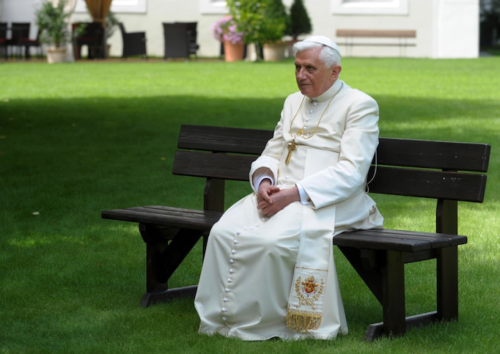 [1]
The previous head of the worldwide Catholic[2] Church, Pope Emeritus Benedict XVI, was the first Pope in 600 years to retire from the office. Popes usually serve until their death. But Benedict was in failing health and felt he could no longer carry out the duties of the office. So he retired several years ago. But that hasn’t influenced his concern for the beloved institution that he has served for so many years.

Benedict is unable to travel. So, in a recent message, delivered by his personal secretary at the Cologne Cathedral for the funeral of his dear friend, Cardinal Joachim Meisner, this past Saturday, he detailed his concern for the Catholic Church.

Benedict said that his old friend Cardinal Meisner “found it difficult to leave his post, especially at a time in which the Church stands in particularly pressing need of convincing shepherds who can resist the dictatorship of the spirit of the age and who live and think the faith with determination.”

He continued, saying, “in this last period of his life, he learned to let go and to live out of a deep conviction that the Lord does not abandon His Church, even when the boat has taken on so much water as to be on the verge of capsizing.”

The Catholic Church is a massive worldwide institution. Millions of people around the globe are Catholic. For many it is a faith foundation on which to stand. But it has also had its share of scandals and problems, especially when it comes to leadership ignoring biblical doctrine. Whether or not this Church capsizes, as Benedict is worried about, is dependent upon the integrity and the determination of everyday Catholics to adhere to sound biblical teaching and stand for the Lord and His standards, even when it is difficult. The wheel of the ship, so to speak, is in the hands of every Catholic. Will they keep it from capsizing?

Benedict is also hopeful and thankful, and optimistic for the future. The 90 year-old retired pontiff recently gave a birthday speech in which he said, “My heart is filled with gratitude for the 90 years that the good God has given me. There have also been trials and difficult times, but through it all He has always led me and pulled me through, so that I could continue on my path.”