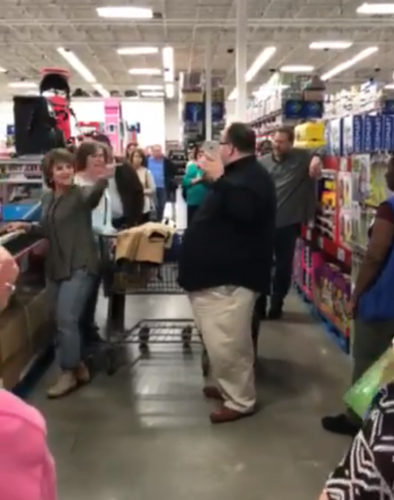 On November 10, a Sam’s Club in Dothan, AL, went from being just a store, to being a place of worship. Michelle Holland Conner, who experienced it, said “Sometimes you need a little church. Even if it’s in Sam’s Club.” She later posted the wonderful video of the event on Facebook.

It all started when a group of local Christian musicians began testing out a keyboard. The group included Slade Alday and his wife Danielle. He was asked about the inspirational event.

“It was impromptu,” he said. Alday is a member of the Sons of Jubal, a Baptist chorus.

He continued, “The Holy Spirit just showed up in a mighty way. In this time when people can’t get along for various reasons we were all together. We were just singing praises to God.”

Alday continued, “When we were walking around we turned the corner and there were these keyboards. Like any curious musician, Joy wanted to mess around on them and started playing some song. We started singing in our little group and began having a worship time. Our eyes were closed, so we didn’t really know how many people had joined in before I looked around.”

Alday said, “I heard people saying ‘Amen.’ So, I turned around and they had their hands raised; some were crying. It was a beautiful moment.”

Alday decided to start doing a live feed on Facebook Live as even more people came over to participate.

Conner added, “It was a very spiritual moment. I was very blessed by it, and if you listen to the video, you’ll hear a bit of laughter. At first, I thought, ‘Who’s laughing?’ But then I realized it was joyous laughter.”

She added that one lady had tears in her eyes and a gentleman kept saying, “Go God.”

Even the Sam’s club employees got in on the action, Alday remarked, “A Sam’s Club employee named Christian Melton joined in. My, what a voice. She sounded like Whitney Houston. The whole thing ended up being shared on Facebook and trending on Twitter.”

Alday likened the moment to John 12:32 where, “Jesus said, ‘If I be lifted up I will draw all men unto me.”In that little bit of time the gospel was proclaimed around the world. People responded. It was mind-blowing.”

“They’re saying something similar to what I experienced in person that night…’I was having a bad day, and this just really blessed me and turned my day around,’ or ‘I was in a bad spot, and this reminded me that God is good,’ and ‘He is awesome or bigger than my problem.’”

Indeed, our God is awesome and He will do what it takes to bring encouragement to people, even if it means holding a worship service in Sam’s Club.

Thank you to our Lord for His goodness in our everyday lives.