This is disgusting.[1] I didn’t even know this show existed until now. AMC’s “Preacher” is evidently in its second season and is based on a comic book. In the latest episode they have a scene depicting Christ having graphic sex on the night of The Last Supper. To Christians, this is blasphemous. They called the episode, “Dirty Little Secret.” Just revolting. Why am I not surprised? I’m not alone in my revulsion here. A number of viewers swore off the show after seeing this spectacle.

Something like this would never happen on AMC if it was Mohammed being depicted as a pedophile. There would be massive outrage. But because it is Christ, they are good with that. Hypocrites. AMC has a right to run any show they like. But we all have the right not to watch. It’s a shame that they can’t see past their hatred of Christianity to the fact that they are alienating a huge part of their viewership. I won’t ever watch it now and millions of Americans feel the same way. 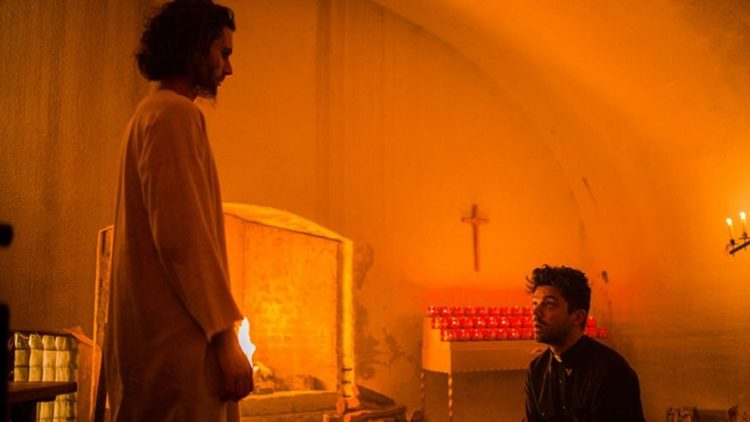 The latest episode of AMC’s “Preacher”[4] has some people incredibly upset thanks to a graphic scene depicting Jesus Christ having sex on the night of The Last Supper.

The AMC drama is based on a comic book about a modern-day Preacher who is losing his faith and encountering many different demonic entities and monsters. In the second episode of Season 2, which aired Monday, the main character goes on a hunt to find a literal relative of Christ. However, it’s the way the episode opened that has many very upset and offended.

The first seven minutes of the episode, titled “Dirty Little Secret,” depicts Jesus and a woman having sex, speaking graphically about various acts and showing the two’s various positions in silhouette. Later, he tells her to keep it a secret before saying that he’s got to go off to do something for his father. It later becomes clear that this is the night that Jesus would be eventually crucified.

There’s nothing that Hollywood and the left won’t debase that is good and holy… unless of course it’s Islam. Christian leaders are incensed by this episode and I don’t blame them in the least. “Depicting Jesus in a grotesque sex scene is an assault on the sensibilities of all Christians, as well as people of good will who are not Christians,” said Catholic League president Bill Donohue in a statement. “We have been treated to this kind of fare from some pay-per-view channels, but we are not accustomed to AMC getting into the mud. If this is a signal of what it aspires to become, we will rally Christians against it.”

This episode[5] was beyond crass and uncouth. In it Jesus has a marathon sex session with a married woman. I’ll spare you the dirty talk and multiple positions. Then he declares he was a virgin. Language with the apostles includes memorable lines such as, “Chill, bro.” Funny, I don’t remember that passage from the Bible. And if you weren’t already offended enough, the show continues to follow its graphic novel origins by portraying the Messiah descendant of Jesus as a mentally handicapped result of inbreeding. Anything to mock Christianity and degrade Christians. Definitely not worth watching and shame on AMC.

I think #Preacher[6] may have lost me, last night. That was taking things a little too far. Felt really uncomfortable watching. [email protected][7]

Preacher has lost me as a fan also. It was pushing the envelope as it was, but this last episode is sacriligious!

#Preacher[6] went from crazy good to blasphemous! Did not like! pic.twitter.com/0K7kQWvKGK[10]