I have now seen two different black men stand up for the Confederate flag and history… one in Oklahoma, the “Black Rebel” and now Al McCray in Florida. Two good men who recognize the truth: the Confederate flag is about heritage, not hate[1]. People have a misconception that the Civil War was strictly and primarily about slavery. It wasn’t. It was about State’s rights. As McCray points out, it was an issue of Northern aggression and Northern imperialism. Although slavery became a major issue, so was taxation. There was also slavery in the North as well. The Civil War was complicated and there was evil on both sides. The North plundered and looted the South as they defeated them. Rape, murder and pillaging were commonplace. They took everything they had. The Confederate flag was never about slavery – it was about Southern heritage and a way of life. McCray is standing up for that heritage and that history. 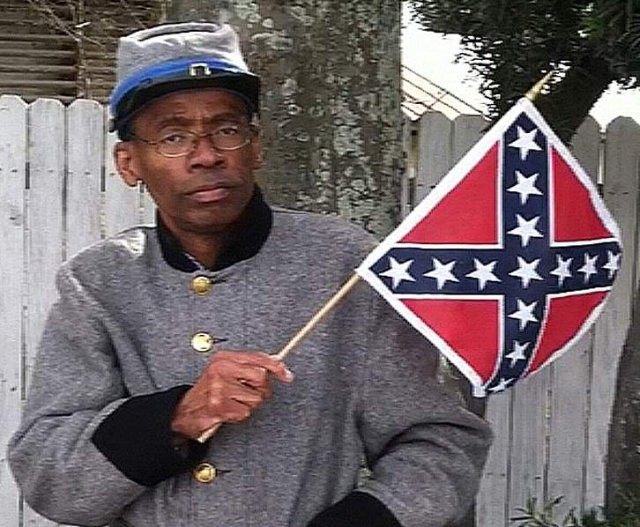 Al McCray from Tampa, Florida is a black member of a Confederate group who defends the Rebel flag.

From the Tampa Tribune[3]:

Whenever members of the Judah P. Benjamin Camp of the Sons of the Confederate Veterans don their grey wool uniforms for a demonstration or re-enactment, Al McCray is there among his brothers.

He marches in the parades and flies the Confederate flag. He speaks out against the notion that the Confederate battle flag is a symbol of racism and defends “Southern heritage” causes.

Yet McCray is different from the rest of the camp.

While the other members are descendants of soldiers that fought for the south in the Civil War, McCray is an African-American “legionnaire” — his ancestors were slaves on plantations near his hometown of Manning, South Carolina, just outside of Columbia.

“I understand the true nature of the war, and slavery was not the primary issue,” McCray said. “It was an issue of northern aggression and northern imperialism.”

McCray knows many people don’t understand his defense of the Confederate flag and Confederate States of America, particularly since the flag has become a political firecracker after nine black church members were slain last month in a racially motivated shooting in Charleston, South Carolina.

Among those who question his stance, he said, are the 63-year-old’s four adult children, as well as his parents. “My family is completely the opposite of me, no one supports my views or beliefs but we still get along,” said McCray, a Tampa journalist and managing editor of TampaNewsAndTalk.com.

In his years attending Civil War conferences, reenactments and Sons of Confederate Veterans gatherings, McCray said, he has only encountered three to five other African Americans. Still, his involvement doesn’t feel “weird or out of place at all,” he said.

Read the rest of the story here[4].

As Mark Steyn put it[5], “The same people who tell you that when nine people die in a church in South Carolina that it’s all the fault of the Confederate flag, and the Confederate flag has to be run through the shredder, and Confederate war memorials all over the country have to be torn up and the ground salted, then turn around… when four Marines die in a recruiting office …and will say that this has nothing to do with Islam, and has no wider implication. All jihad is local, there’s no bigger picture to see here.” McCray knows that the attacks on the Confederate flag are all about politics and political correctness, just as Mark Steyn does. Some things are more vital to Leftists than others and race is a handy weapon to bludgeon Americans with so they can censor and rewrite history. It is the Marxist Ministry of Thought and they won’t tolerate a proud and independent South. Race has very little to do with this witch hunt – it’s all about the communist agenda, book burning and destroying Constitutional rights.