Barack Obama Is An Anti-White Racist

It actually SHOULDN’T be a secret that Barack Obama is not overly fond of white people. The first clue was that he spent 20 years in Jeremiah Wright’s anti-American, anti-white, anti-Semitic church. You don’t go to a church for twenty years unless you’re in general accordance with the pastor.

Furthermore, Barack Obama has made a number of racist comments over the years. Here are just some of them,

It’s not okay for Barack Obama to say things like that.

Nor has Barack Obama’s administration been free of charges of racism. J. Christian Adams quit Obama’s Department of Justice[2] because the law was being enforced differently based on the race of the people involved.

J. Christian Adams, now an attorney in Virginia and a conservative blogger for Pajamas Media, says he and the other Justice Department lawyers working on the case were ordered to dismiss it.

…But Adams told Fox News that politics and race was at play in the dismissal.

“There is a pervasive hostility within the civil rights division at the Justice Department toward these sorts of cases,” Adams told Fox News’ Megyn Kelly.

Adams says the dismissal is a symptom of the Obama administration’s reverse racism and that the Justice Department will not pursue voting rights cases against white victims.
“In voting, that will be the case over the next few years, there’s no doubt about it,” he said.

In an opinion article published in the Washington Times last week, Adams said the dismissal “raises serious questions about the department’s enforcement neutrality in upcoming midterm elections and the subsequent 2012 presidential election.”

It wasn’t okay in the sixties when the Department of Justice had one standard of justice for white Americans and another standard for black Americans and it’s not okay today. Racism is either wrong when it’s aimed at all races or it’s not. I think it is wrong. Barack Obama doesn’t agree.

That’s why he had this to say back in 2007[3] (PS: Yes, Obama’s racist comments were made in 2007, during his campaign for the presidency, and they were buried by the mainstream media because they made him look terrible. So, people are just learning what Obama said today and the reaction from the MSM is, “Oh, that’s old news.” Of course it is old news because when it was new news, the MSM hid it from its audiences to keep from making trouble for Obama.)

In a video obtained exclusively by The Daily Caller, then-presidential candidate Barack Obama tells an audience of black ministers, including the Rev. Jeremiah Wright, that the U.S. government shortchanged Hurricane Katrina victims because of racism.

“The people down in New Orleans they don’t care about as much!” Obama shouts in the video, which was shot in June of 2007 at Hampton University in Virginia. By contrast, survivors of Sept. 11 and Hurricane Andrew received generous amounts of aid, Obama explains. The reason? Unlike residents of majority-black New Orleans, the federal government considers those victims “part of the American family.”

The racially charged and at times angry speech undermines Obama’s carefully-crafted image as a leader eager to build bridges between ethnic groups. For nearly 40 minutes, using an accent he almost never adopts in public, Obama describes a racist, zero-sum society, in which the white majority profits by exploiting black America. The mostly black audience shouts in agreement. The effect is closer to an Al Sharpton rally than a conventional campaign event.

…Obama begins his address with “a special shout out” to Jeremiah Wright, the Chicago pastor who nearly derailed Obama’s campaign months later when his sermons attacking Israel and America and accusing the U.S. government of “inventing the HIV virus as a means of genocide against people of color” became public. To the audience at Hampton, Obama describes Wright as, “my pastor, the guy who puts up with me, counsels me, listens to my wife complain about me. He’s a friend and a great leader. Not just in Chicago, but all across the country.”

…The Los Angeles riots and Hurricane Katrina have racism in common. “The federal response after Katrina was similar to the response we saw after the riots in LA,” he thunders from the podium. “People in Washington, they wake up, they’re surprised: ‘There’s poverty in our midst! Folks are frustrated! Black people angry!’ Then there’s gonna be some panels, and hearings, and there are commissions and there are reports, and then there’s some aid money, although we don’t always know where it’s going – it can’t seem to get to the people who need it – and nothin’ really changes, except the news coverage quiets down and Anderson Cooper is on to something else.”

…“Now here’s the thing,” Obama continues, “when 9-11 happened in New York City, they waived the Stafford Act – said, ‘This is too serious a problem. We can’t expect New York City to rebuild on its own. Forget that dollar you gotta put in. Well, here’s ten dollars.’ And that was the right thing to do. When Hurricane Andrew struck in Florida, people said, ‘Look at this devastation. We don’t expect you to come up with y’own money, here. Here’s the money to rebuild. We’re not gonna wait for you to scratch it together – because you’re part of the American family.’”

It’s a remarkable moment, and not just for its resemblance to Kayne West’s famous claim that “George Bush doesn’t care about black people,” but also because of its basic dishonesty. By January of 2007, six months before Obama’s Hampton speech, the federal government had sent at least $110 billion to areas damaged by Katrina. Compare this to the mere $20 billion that the Bush administration pledged to New York City after Sept. 11.

Moreover, the federal government did at times waive the Stafford Act during its reconstruction efforts.

Three hundred years ago. It’s a reference the audience understood.

Barack Obama says racist things about white people, his Department of Justice discriminates against white Americans, and he lies to black audiences to convince them that white people hate them. A white man voting for a man like that is like a black man voting for David Duke. Why in the world would you vote for someone who doesn’t like you because of your skin color?

Is that a shocking statement? If so, I don’t know why because it’s the central argument Democrats make to black Americans every day of the week. The only difference is, Democrats are lying, while Obama really doesn’t like white people. You don’t have to take my word for it, look at the things he’s said. Listen to him talk.

Oh, but we can’t apply the same standards to Barack Obama that we apply to white Republicans!

First of all, we’re not.

Republicans get called racist for opposing Obamacare, complaining about welfare, mentioning Chicago or how much Obama golfs, and a zillion other things that have nothing to do with race. Since that’s true, let me be one of the first conservatives to say if Republicans are going to be called racist over lies, then it’s time to start holding Barack Obama accountable for making ugly, racist statements and trying to demonize white Americans.

Furthermore, not only is Barack Obama’s racism not okay, the liberals blithely excusing it or trying to change the subject because they want their side to win should be ashamed. It’s not okay to turn a blind eye to hatemongering and racism because the racist in question is a candidate you like. Doing that is hypocritical, disgusting, dishonorable, and the people doing it should feel bad about themselves as human beings.

PS: When does Barack Obama announce that some of his “best friends” are white? Like his butler, the yard guy, his campaign contributors… 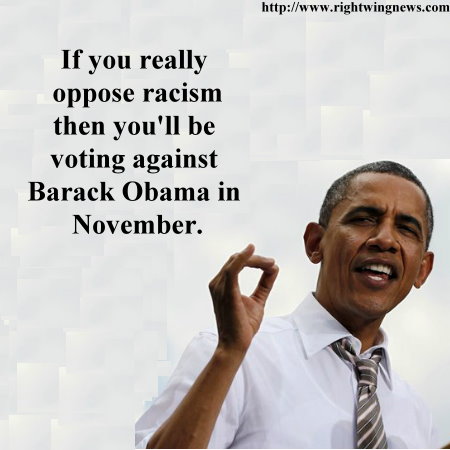