BREAKING: Gay Couples in Texas Just Got Some BAD News

This is a fantastic victory for conservatives in Texas![1] I couldn’t believe it when Mayor Parker of Houston shoved through the HERO ordinance against the wishes of the voters there. Over 50,000 petition signatures were gathered and Parker threw them out saying she didn’t care, that HERO would stand. The gay rights mandate allowed for both sexes to use each other’s restrooms and locker rooms, opening the door for sexual predators. Then Parker violated religious rights profoundly by subpoenaing several pastors who were not parties to the litigation, ordering them to turn over all communications regarding the ordinance, the mayor, homosexuality and other related issues, including sermons regarding these topics. This forces the halt of HERO and will put it on the ballot for a vote by the people next November. No more dictator tactics for Parker allowed. 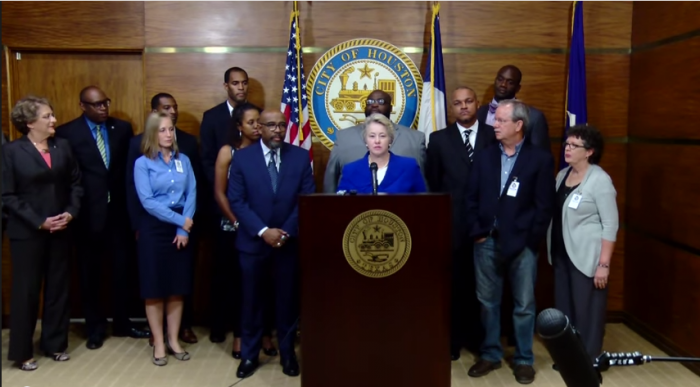 (Photo: Screen Grab via YouTube/MayorAnniseParker)
Houston Mayor Annise Parker (at podium) announces the withdrawal of subpoenas for the sermons of five local pastors at a press conference on Wednesday October 30, 2014.

There is now near certainty that Houston’s controversial equal rights ordinance, known as HERO, will appear on the November ballot, as Texas Supreme Court has suspended it, ruling that City Council must repeal it by August 24 or put it to popular vote.

“We will now get to vote on Mayor Parker’s personal, liberal, LGBT agenda this November!” Jared Woodfill, former Harris County Republican Party chief and ones of the plaintiffs, wrote in a blog post[3].

The gay rights ordinance, which, among other things, allows members of the opposite sex to use each other’s restrooms, hit the headlines after a group of conservative pastors, known as the Houston Five, were subpoenaed by the city in a lawsuit.

The suit against the city argued that the ballot petition was incorrectly thrown out. The Houston Five were not a party in the suit but did publicly support the petition.

The city’s lawyers at the time demanded that the pastors turn over all communications addressing homosexuality, gender identity or the city’s first openly lesbian mayor, Annise Parker. Although the mayor later withdrew the subpoenas, it was not before she received national scrutiny for doing so.

Opponents of the ordinance launched a petition that generated more than 50,000 signatures which was well above the 17,269 signatures needed to put the ordinance on the ballot. City Secretary Anna Russell also determined there were enough valid signatures.

“Mayor Parker decided to ignore the will of the people and the city charter, and unlawfully rejected the almost 55,000 signatures,” Worrdfill said.
ADVERTISEMENT

The Texas Supreme Court ruled Friday that “the legislative power reserved to the people of Houston is not being honored.”

The state’s highest civil court’s ruling stated, “The City Council is directed to comply with its duties, as specified in the City Charter, that arise when the City Secretary certifies that a referendum petition has a sufficient number of valid signatures. Any enforcement of the [Equal Rights] ordinance will be suspended … If the City Council does not repeal the ordinance by August 24, 2015, then by that date the City Council must order that the ordinance be put to popular vote during the November 2015 election.”

Woodfill wrote that Mayor Parker should apologize to the people of the city “for the huge amount of resources spent on this litigation.”

“Additionally, the city is now potentially liable for hundreds of thousands of dollars in legal fees,” he added. “It is now time to gear up for the battle that lies ahead in November. Mayer Parker and her liberal allies will do everything they can to promote her personal LGBT agenda at the ballot box this November.”

“This is a total victory for the people of Houston, for free speech, and a major loss for Mayor Parker and LGBT advocates who fought so hard to silence the people’s voice,” Saenz said in a statement. “We are thrilled that the rogue and dictator style tactics of lesbian Mayor Annise Parker and her crew have been stopped by the rule of law and the persistence of faith-based leaders in Houston. The Texas Supreme Court got it right on this one.”

A July 26, 2015 article incorrectly stated that the “Houston Five” pastors were a party in the lawsuit against the city of Houston. They were not a party in the suit.

Mayor Parker broke the law and did a two-step on the Constitution in the name of gay rights. The Texas Supreme Court just slapped her hands with this and it is deeply gratifying. The Liberal fascist tactics of Parker and others must be stopped. They are not the ruling class and the voters have a right to have their say. Now, it is the conservatives’ job to make sure people understand what is at stake here and to vote for what they believe in come November. It’s one thing to implement such legislation after a fair vote, it’s quite another to force it on everyone and then willfully disregard the voice of the people. Mary Parker should have to personally pay all related fees to this and apologize to the citizenry publicly. But alas, that won’t happen. We’ll have to settle for her throwing a tantrum in November. Dinner and a show.