What the heck has happened to Denver?[1] It used to be a nice place to live. Now the City Council – specifically Councilman Paul Lopez – is saying that Chick-fil-A is a moral decision for the city. Excuse me? Whose morals? You certainly don’t have any that I can see. Chick-fil-A serves all customers, regardless of their personal choices, so there is no problem there. What they are objecting to is that charitable arms of the corporation give to anti-LGBT causes. That’s their right and none of their business. To deny them a concession at the airport on this basis is a violation of their constitutional rights and their freedom of religion. Lopez paints them as evil – I say it is the other way around here. 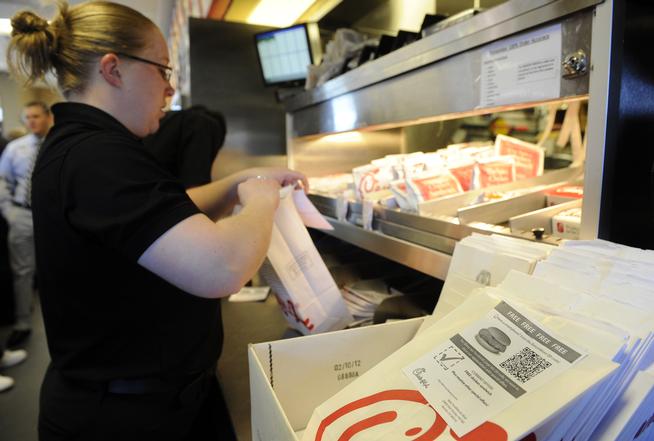 Councilman Paul Lopez called opposition to the chain at DIA “really, truly a moral issue on the city.”

His position comes despite ardent assurances from the concessionaires — who have operated other DIA restaurants — that strict nondiscrimination policies will include protections based on sexual orientation and gender identity.

Robin Kniech, the council’s first openly gay member, said she was most worried about a local franchise generating “corporate profits used to fund and fuel discrimination.” She was first to raiseChick-fil-A leaders’ politics during a Tuesday committee hearing.

The normally routine process of approving an airport concession deal has taken a rare political turn. The Business Development Committee on Tuesday stalled the seven-year deal with a new franchisee of the popular chain for two weeks.

Should the committee reject the lease, an individual member — if one is willing — could introduce the concession deal in the full council. Ten of the 13 members attended Tuesday’s meeting, and none rose to defend Chick-fil-A, although some didn’t weigh in.

“We can do better than this brand in Denver at our airport, in my estimation,” new member Jolon Clark said.

At the committee’s next meeting, Sept. 1, city attorneys likely will brief the committee behind closed doors on legal considerations affecting the decision.

City leaders in Chicago attempted to block a new Chick-fil-A location for similar reasons three years ago, ultimately backing down after reaching an agreement with the chain. Mayors in Boston and San Francisco vowed to fend off any foray by Chick-fil-A into those cities. The issue continues to flare on some university campuses.

“Any and all hiring, promotion — any and all of those decisions are made by us,” De La Rosa told the committee. “We have a long history of diversity, all those kind of things, between both companies. These would not be issues.”

In a statement, Chick-fil-A corporate officials said that their company is “focused on providing everyone great food in an atmosphere of genuine hospitality. We hope to welcome all guests to any of our locations, including a proposed licensed location at the Denver International Airport.”

Most focused on political firestorms sparked by remarks made by Chick-fil-A’s now-CEO Dan Cathy, reaching a peak in 2012 after court decisions favorable to same-sex marriage. The company also came under fire for donations made by charitable arms to groups opposing LGBT causes.

Last year, Cathy said publicly that he regretted inserting the company into political debates. Its foundations also cut back on donations to groups that some considered anti-gay.

Kniech asked De La Rosa, “If the national corporation with which you are affiliated once again puts themselves at the center of a national debate about depriving people and their families of rights, would you as a concessionaire have any ability to influence that?”

“I don’t think you would, either,” Kniech said. “And that’s my concern.”

Lopez compared Chick-fil-A’s past politics to divisive remarks made this year by Republican presidential candidate Donald Trump about immigration and other issues, saying: “I would throw up in my mouth a little bit if we did business with Trump.”

Kniech, Lopez and other members said DIA’s reputation was at stake, although airport officials view the concession as a big potential money-maker.

DIA has estimated the restaurant’s first-year sales at $4.1 million, with $616,278 paid each year in concession fees. Chick-fil-A restaurants typically generate more in six days a week, DIA says, than most fast-food concessions that are open all seven.

Once again this is a religious issue and not about discrimination. The fact that they throw Donald Trump into the mix just infuriates me. Trump should buy up the entire airport and privatize it. I so hope a true conservative wins this next election and shuts up all these raving radicals who are anti-Christian in the extreme. Not one member on that council stood up for Chick-fil-A. Instead, it turned into a Christian-bashing forum. The gay mafia has infiltrated Denver’s City Council. Boston, San Francisco and Chicago’s mayors have all basically banned Chick-fil-A from their cities because they are devout Christians. Johns Hopkins University has as well. This will spread and you will see more and more blatant discrimination and persecution of Christians until someone gets in there that has true morals, faith and has the conviction to put an end to this madness. Denver is off my list of places to visit or live in. They can stuff it.