I’m right there with the Reverend Bill Owens on this…[1] it is now a civil rights issue for Christians, Constitutionalists[2] and people of faith. We simply will not comply. The Supreme Court has now set in motion a monumental clash between separate constitutional rights. Americans will not willingly cede their freedom of speech and religion to gay marriage which was never even mentioned in the Constitution. The massive civil disobedience has already begun and the path is set. My course was chosen long ago. Americans are not obliged to obey an unjust law, even if the highest court in the land decrees that we do. We answer to a higher power than the Supreme Court. 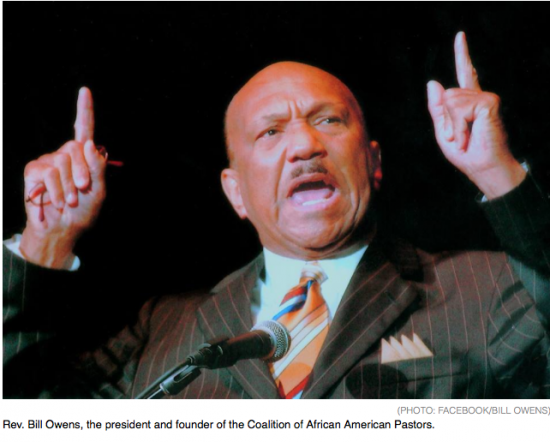 A coalition of African-American pastors vowed this week that there will be massive civil disobedience if the U.S. Supreme Court legalizes same-sex marriage in a ruling on the matter expected this month.

At a press conference in Memphis, Tennessee, members of the Coalition of African-American Pastors joined Christian ministers at the Church of God in Christ’s historic Mason Temple to warn the Obama administration to prepare for massive civil disobedience among pastors and clergy if state bans on gay marriage are deemed unconstitutional.

“If they rule for same-sex marriage, then we’re going to do the same thing we did for the civil rights movement,” said Rev. Bill Owens, president and founder of CAAP. “We will not obey an unjust law.”

“The politicians and courts have tried to take God out of this country,” continued Owens. “This country was founded on Godly principles. We will not stand back.”

Using the 14th Amendment to trump the 10th Amendment, is simply unconstitutional. And to define the rights of those with a sexual preference over guaranteed 1st Amendment rights is criminal. This is an issue that should have been left to the discretion of the States and not legislated from the bench. We are witnessing cultural Marxism being implemented and the destruction of the Constitution as we know it. I concur with Senator Ted Cruz[6] who says ‘lawless’ Supreme Court rulings have led to ‘some of the darkest 24 hours in our nation’s history.’ Both rulings on Obamacare and gay marriage are naked and shameless judicial activism. To appease Barack Obama, the Supreme Court rewrote constitutional law in a politically motivated move of epic proportions. In the gay marriage ruling, the war against Christians in the US took a giant leap forward and the civil rights movement for Christianity was born. We will not comply.