Broughton probably targeted that church[1] either out of convenience, familiarity or the fact that it was well attended by the African American community. Just another fake hate crime meant to stir up racial animosity between blacks and whites and spur on a race war. Sheer evil. If there isn’t enough hatred going around, some people will make it appear there is so that chaos and bloodshed will increase and we will be at each other’s throats. This must have frightened those poor people a great deal and no church should have to lock their doors. This wasn’t just a fake hate crime against the African American community, it was also hate directed at Christians. What a despicable human being this man is. 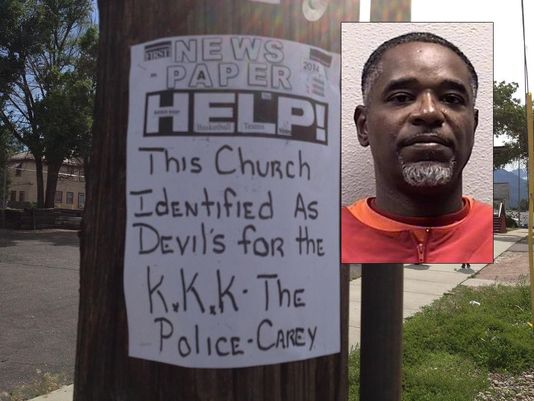 COLORADO SPRINGS, Colo. (CBS4)– A Colorado Springs man was arrested after police believe he left racist messages outside a church.

Vincent Broughton, 44, who is black, is facing charges for committed a bias-motivated crime and disorderly conduct.

The signs were posted outside the New Covenant church that is predominately attended by African Americans. One sign references the KKK. Another reads, “Black men beware, you are the target.”

The messages had the congregation on edge.

“We locked our doors this morning, so we were inside, but it shouldn’t be that way. You shouldn’t have to lock your doors in the church, it’s just… I’m speechless,” said Pastor Roland Joyner.

Police said Broughton admitted to posting the flyers but did not explain why he targeted the church.

Racism and hatred are inherently colorblind. And unfortunately, Broughton will probably get a slap on the wrist and get out quickly so he can go stir up more trouble. Next time, he just might get people killed doing it. I abhor the KKK, but it makes a handy excuse and weapon to stir racial hatred. Any excuse will do. It’s more of this Black Lives Matter bull crap. By the way, this is a common tactic of the Marxist Left. One also has to wonder[3] if the church burnings being hyped right now are done by individuals like Broughton. As Michelle Malkin put it, once again, falsified history is repeating itself. Things are not as they appear in America and the whole country is a stage being set afire for a politically-driven agenda. Another fake hate crime – if it bleeds, it leads.