Franklin Graham is quite correct[1] when he points out that God is very clear on the definition of marriage as being between a man and a woman. If you are a Christian and read your Bible, you know this to be true. And there are millions of Christians nationwide in agreement with Rev. Graham. They will quietly dissent, no matter the cost. They answer to a higher power than the Supreme Court and will simply not comply with an unjust and ungodly ruling. You are witnessing the beginning of a new civil rights movement that will encompass constitutionalists, Christians and all people of faith. I hardly think this is what the Left envisioned, but it is certainly what they will get. 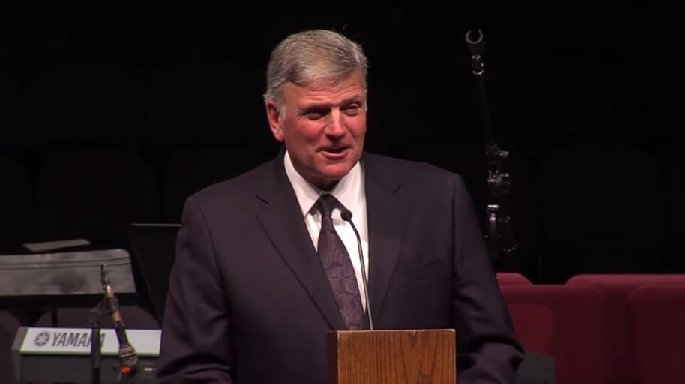 “God is clear about the definition of marriage…”

Many of the 1.7 million people who like Franklin Graham’s Facebook page are giving a big thumbs-up to his reaction to the Supreme Court’s same-sex marriage decision. That message was posted by the head of the Billy Graham Evangelistic Association shortly after the high court ruled 5-4 that same-sex couples have a nationwide right to marry, no matter what individual states or their residents might say.

As of this writing, more than 130,000 people have liked Graham’s statement, which reads in part: “With all due respect to the court, it did not define marriage, and therefore is not entitled to re-define it.” And the number of Facebook likes for the pastor’s reaction is growing rapidly.

Graham’s assessment of the country’s standing in the eyes of God is rather pessimistic, as he tells his Facebook friends: “I pray God will spare America from His judgment, though, by our actions as a nation, we give Him less and less reason to do so.”

The entirety of Franklin Graham’s popular — and certainly for many advocates of same-sex marriage, provocative — post on Facebook is shown below. 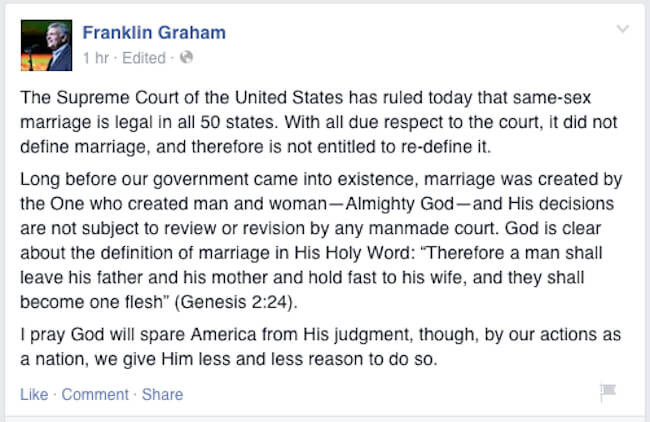 Just yesterday, possibly in anticipation of the Supreme Court decision on same-sex marriage as a constitutional right nationwide, the Rev. Graham commented on the White House event President Obama hosted for LGBT activists earlier this week. Graham told his Facebook audience that the shift in attitudes about so-called ‘gay rights’ exhibited by Americans in recent years represents a dangerous “moral decline” and an acceptance of “sin as something to be proud of.”

That Facebook post has also generated tremendous response, with close to 155,000 likes, nearly 50,000 shares, and more than 18,000 comments. You can read Franklin Graham’s Thursday message on ‘gay rights’ below. 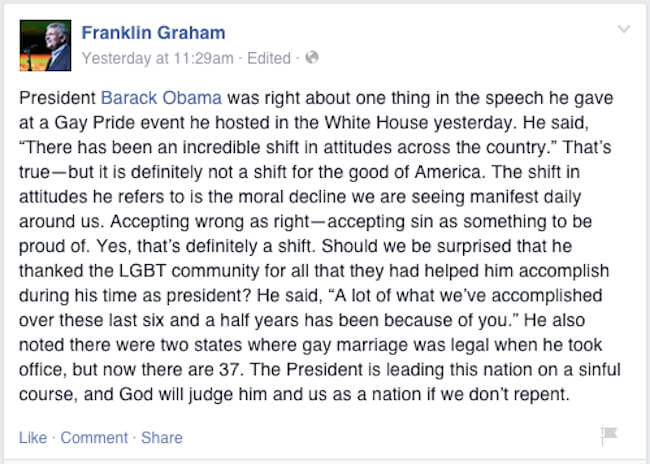 The Supreme Court has now rewritten constitutional law and overridden State’s rights to empower sexual preference. They have also stomped all over freedom of speech and religion. Freedom of religion is the most precious freedom enumerated in the Constitution to Americans. We fought a bloody revolution for it. Looks like we have come full circle. America has followed a Marxist and turned from God. We have disparaged and turned against Israel – God’s chosen people. That portends a very bleak and dire future for America if it is not reversed and soon. As Graham put it, God defined marriage and the Supreme Court is now redefining it. Barack Obama may reside in the most powerful political position in America for a brief time, but he does not ultimately rule over Christians. Now is the time to stand together and to resist… to redefine our leadership.