Have to be Politically Correct! High School Changed Mascot Name It’s Had for 90 Yrs [Video]

Oh, I understand alright…[1] you people have lost your minds. You have your logic so entangled in political correctness, you could just about justify anything. I suggest the good people of Goshen vote that school board out yesterday and reverse course. You are infected with Marxists who have other agendas cooking. And the Native Americans decrying this are either useful tools or willing participants in a communist movement to cleanse society of history and heritage. The voices of sanity are being silenced in Goshen and across the nation. For 90 years that mascot has proudly represented that school. Now, because of faux outrage and deliberately taking a moniker intended to communicate pride and strength and turning it into a racist epithet, these Marxists are literally destroying the school pride built upon for decades. Gee, Goshen… you fell with barely a whimper. 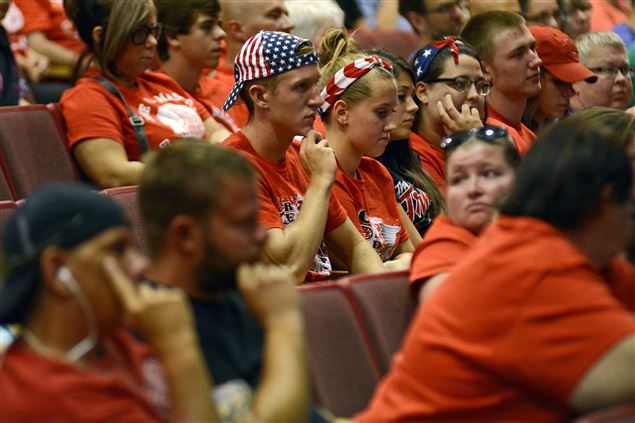 From The Elkhart Truth:

The Goshen Redskins mascot that has represented the community for nearly 90 years will be retired on Jan. 1, 2016.

The school board voted 5-2 in favor of changing the name, which many argued is offensive and derogatory to Native Americans, at its regular meeting Monday, July 27.

“This has really been a hard one for me,” Cripe, the board’s president, said moments before the vote. “I’m overwhelmed. If you could have been in any of our hearts since this was brought to us, you would understand.”

The decision came after more than two hours of arguments from the public at Monday’s board meeting in the Goshen High School[3] auditorium, with more than 50 speakers delivering passionate pleas to the board on both side of the issue.

It is unclear what the next step will be in replacing the mascot, but the student body and larger Goshen community have asked to be a part of the process.

The debate about the Redskins name — about whether it is a way to honor Native Americans or if it is an offensive and derogatory term — has surfaced in Goshen every few years.

Even 20 years ago, small groups approached the school board and asked for a change — but members never thought the timing was right.

Something changed this summer, when the debate resurfaced at the board’s June 8 meeting after two individuals asked the board to consider retiring the mascot.

Proud Redskins attended the next board meeting to defend their mascot, but so did more community members who felt the time has come to find a new mascot to better represent Goshen.

Even more individuals on both side of the debate attended the July 13 meeting, delivering passionate pleas to the board.

On the night of the vote, the central arguments were repeated by both sides.

Clad in red “SAVE OUR MASCOT[5]” T-shirts, Goshen graduates and current students told the board that the Redskins mascot honors Native Americans rather than disparages them.

“We use the name to show we have strength and pride each time we go out on the field or the ball diamond or the pool,” student Jesse Rhodes said.

But several Native Americans told the board that despite the good intentions, the name hurts.

“Please don’t tell us how to feel or argue we are being too sensitive,” Rochelle Hershberger, who is of Native American descent, told the board. “Don’t use the R-word to my face. I am not your mascot, my family is not your mascot and my children are not your mascot. I have a name. I am worthy of being seen as a person.”

The Marxists start in small towns and work their way out and up. Goshen has just over 32,000 people there. The town strikes me as mostly a conservative small town, but it is being turned inside out and reshaped by political correctness and culture wars. Shame on their leaders for submitting to the roving radicals proclaiming racism at every turn. Now, they’ll let students and the community step in and pick a mascot. It would serve them right if they picked something truly offensive. In New York when they pulled this crap, community members used school board elections to show their disappointment with the decision and other organized efforts were utilized to “change it back.” If my kids went to that school, they’d be on their way to a private school or home schooling immediately. I predict a stunning lack of attendance and participation in sports there for the foreseeable future. This PC nonsense is spreading like a cancer across the country, fanned by the machinations of communists and Progressives. Just stop it already.