If Spike Lee Says, “There Is a War on the Black Male,” Who’s Waging It?

That’s a semi-serious question. Semi-serious because I don’t really think there’s a “war” on anyone in America. Yet and still, if there’s a war, who’s waging it? 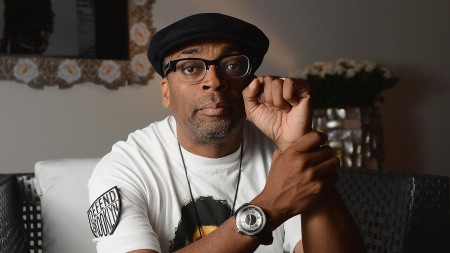 Filmmaker Spike Lee weighed in on the death of Michael Brown and said the “uprising” in Ferguson, Mo., is in response to years of racial tension and mistreatment towards the black community in the United States. “When people get to a point – to that tipping point – they can’t take it anymore,” Lee said on CNN on Tuesday, listing the tragedies involving Trayvon Martin, Eric Garner, Rodney King, and others.

While he seemed to disapprove of looting and burning property, Lee also said that he “just hope[s] that things will really blow up if people aren’t happy with the verdict of this upcoming trial.”

The deaths of Brown, Martin, Garner, and others are extreme examples of a growing trend in America, he continued.

“I just think there is a war on the black male, and it’s tearing the country apart, in my opinion,” Lee said. “It’s not just killing us – it’s educational system, it’s the prison system, it’s these young black men growing up with no hope. It’s systematic.”

Officers went to jail in the Rodney King case (which happened in 1991 by the way), George Zimmerman was found innocent in court, and the Mike Brown and Eric Garner cases are still working their way through the court system.

Those 4 cases are a pretty thin reed to base a “war” on. If you really want to talk about a “war,” this comes closer to describing it[3]….

According to the FBI, between 1976 and 2005, blacks, who are about 12 percent of the population, committed 53 percent of all felony murders and 56 percent of non-felony murders. The Centers for Disease Control recently reported that young black men are 14 times more likely to commit murder than young white men.

White liberals know this. Blacks certainly know it. Despite the hoo-ha over George Zimmerman shooting Trayvon Martin, most black people’s experience is not that white vigilantes are shooting them. For every one of those, there are 1,000 black teens killing other black people.

On the other hand, how can it be that “young black men (are) growing up with no hope. (i)t’s systematic,” when most black Americans live in areas controlled by politicians they voted into office? If it’s really true that, “you show me an American ghetto and I’ll show you a place where Democrats are in power,” then maybe black Americans should start asking some hard questions about the politicians they’re supporting.

I don’t say all of this because I don’t think young black men dying or getting lousy educations isn’t important; I say this because it’s so important that people need to stop blaming scapegoats and start dealing with the real issues.