Kareem Abdul-Jabbar Throws Support Behind Rachel Dolezal: ‘I Am Not Tall’

Although Kareem’s first quote is humorous[1], it looks to me like he’s on both sides of the fence here – saying it is wrong to lie and then saying that Dolezal should get a Bill Clinton Get Out of Jail Free card on this. So, I guess what he is saying is it’s okay to lie to further a political agenda. How very Progressively Marxist. Delusional Dolezal has now resigned from the NAACP in Spokane and she is no longer employed at Eastern Washington University. Both correct outcomes for her lying ways. However, she’s not retracting or apologizing for anything she said or lied about. Because spray tan lives matter, I guess. 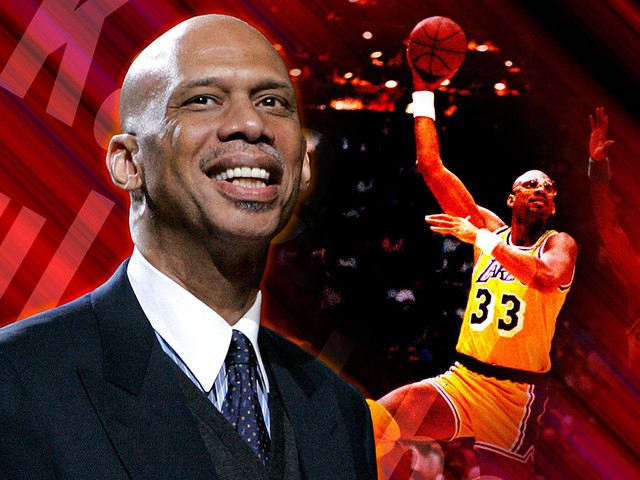 In an op-ed[2] for Time magazine, former NBA legend Kareem Abdul-Jabbar threw his support behind embattled former NAACP leader Rachel Dolezal, who was outed by her parents as white last week after representing herself as African-American for years.

Abdul-Jabbar joked that for the past 50 years, he too has been “living a lie”:

I am not tall (#shortstuff).

Although I’ve been claiming to be 7’2” for many decades, the truth is that I’m 5’8”. And that’s when I first get out of bed in the morning. Just goes to show, you tell a lie often enough and people believe you. I expect there will be some who will demand I give back the championship rings and titles that I accumulated during my college and professional basketball career because I was only able to win them by convincing other players that they had no chance against my superior height. How could these achievements have any lasting meaning if I’m not really as tall as Wikipedia says I am?

Dolezal was revealed to be white last week after her estranged parents showed her birth certificate, which lists both of her parents as white, to local media.

Dolezal has since resigned[3] her role as president of the NAACP’s Spokane, Washington, branch. Additionally, a university spokesman told Breitbart News[4] on Tuesday that Dolezal is “no longer an employee of Eastern Washington University,” where she had taught Africana studies in some capacity. In a statement issued Monday, Dolezal said she would “never stop fighting for human rights.”

Despite the furor, Abdul-Jabbar called Dolezal a “fierce and unrelenting champion for African-Americans politically and culturally.”

“Bottom line: the black community is better off because of her efforts,” writes Abdul-Jabbar.

The thing about race is that, scientifically, there is no such thing. As far back as 1950, the United Nations Educational, Scientific and Cultural Organization (UNESCO) released the conclusions of an international group of anthropologists, geneticists, sociologists, and psychologists that stated that the concept of race was not a scientific entity but a myth. Since then, one scientific group after another has issued similar conclusions. What we use to determine race is really nothing more than some haphazard physical characteristics, cultural histories, and social conventions that distinguish one group from another. But, for the sake of communication, we will continue to misuse the word, myself included, in order to discuss our social issues so everyone understands them. As far as Dolezal is concerned, technically, since there is no such thing as race, she’s merely selected a cultural preference of which cultural group she most identifies with. Who can blame her? Anyone who listens to the Isaac Hayes song, “Shaft,” wants to be black—for a little while anyway (#who’sthecatwhowon’tcopout).

Abdul-Jabbar concludes by conceding that, “yes, it does matter” whether Dolezal is black or white.

“Apparently lying to employers and the public you’re representing when the lie benefits you personally and professionally is a deficit in character,” he wrote. “However, the fight for equality is too important to all Americans to lose someone as passionate as she is and who has accomplished as much as she has.”

Abdul-Jabbar signs off by suggesting society “give her a Bill Clinton Get Out of Jail Free card on this one.”

Give me a freaking break. Now, there is no such thing as race – because that’s convenient. Yet, when an officer shoots a black youth, it’s ALL about race and cop hatred. They evidently can turn race on and off as needed now. Science is now quoted as saying that race doesn’t exist – who are you going to believe? Progressive scientists or your lying eyes? But as Kareem says, who wouldn’t want to identify as black anyway – because you know, Shaft. What a bunch of illogical, delusional, screwed up, lying horse puckey. Kareem is all for saving Dolezal because her work is just too important. Don’t let a little itty-bitty thing like a deficit in character get in the way of a really good race hustle.