Noting That Voter Fraud Is A Felony Is Now Apparently….Racist?

This story is notable mainly because of patronizing and, dare I say racist, attitudes of the people COMPLAINING ABOUT RACISM. 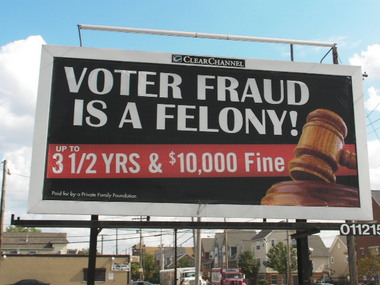 Clear Channel Outdoor will remove 30 billboards across the city that drew complaints of racism and intimidation with their message of “Voter fraud is a felony,” the company said Saturday night.

Jim Cullinan, a spokesman for Clear Channel Outdoor, said the billboards will come down immediately. He said the company continues its donation of 10 other billboards that will have messages to counter the offending ones.

City Councilwoman Phyllis Cleveland, who objected to the billboards and helped lead the push for others to respond to them, called Clear Channel’s decision “fantastic news.”

“That’s a wonderful resolution to this issue,” she said.

Cleveland’s black community and civil rights activists began complaining earlier this month about the billboards, which state that voter fraud is punishable by up to 3 1/2 years in prison and a $10,000 fine. The ads also show a gavel.

The Lawyers’ Committee for Civil Rights Under Law, a voting advocacy group based in Washington, D.C., noted that the billboards were placed in predominantly Hispanic and black neighborhoods in Cleveland, as well as in Cincinnati and Milwaukee. The group sent a letter to Clear Channel Outdoor requesting that the company take down the signs.

…Opponents had already negotiated with Clear Channel to have the company donate use of 10 billboards that will be visible Monday and carry the message
“Voting Is a Right. Not a Crime!” Cleveland City Council will pay for five more to carry the same message.

The Lawyers Committee for Civil Rights Under the Law has also paid for about 36 billboards that went up Thursday in Cleveland and Milwaukee in predominantly Latino and black neighborhoods that read, “Stand up and have your say — Vote. When we vote, we are all equal.”

Additional billboards with the same message will be posted next week in Columbus and Cincinnati, the group said.

Here is the billboard that was put up in response to the one listed above. 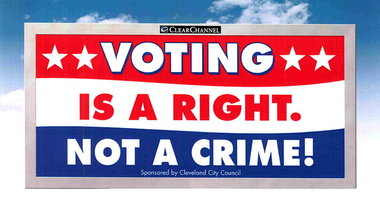 What really seems to be most noteworthy about this story is how most of the people mentioned here seem to regard black Americans as childlike and stupid. For example, no one would consider an ad saying, “Voter fraud is a felony” to be “racism” in an Asian, Jewish, or probably even a Hispanic community. And in a mostly white community, no one would even bat an eye at a billboard like that in the first place. But, if you have some billboards that go up in or near a black community, liberals apparently go, “Black Americans are SO INCREDIBLY STUPID that they don’t even know the difference between voting legally and fraud! We’ve got to get these billboards taken down!”

That would have been bad enough. But, the bulletin boards they put up to counter the “racist” message look like something you’d put up in a Kindergarten classroom. “Voting is a right. Not a crime!” Doesn’t everyone who’s say five and over already know that? Oh wait, I forgot liberals understand that MOST PEOPLE above five already know that, but they think that black Americans are so hopelessly stupid that they need billboards reminding them that they’re not breaking the law when they vote.

In a sane world, the almost impossibly condescending response to the anti-fraud billboards would generate ten times as many complaints about “racism” as the billboards they were designed to replace.