We fought a Revolutionary War over this[1] and now Christians are being persecuted right and left in the name of sexual preferences. Last time I looked that was never, ever mentioned in the Constitution – neither was marriage. Because this young couple stood by their Christian beliefs and politely refused to bake a cake that would have violated them, they have been driven out of business, fined outrageous amounts, stripped of their free speech and threatened with prison. It’s beginning to feel more and more like the old Soviet Union in the good ole’ USofA these days. Wonder when the gulags and reeducation camps will be reinstated for Christians? Of course, they’ll have nicer sounding names and it will be done in the name of diversity and tolerance, but a gulag is a gulag, no matter the label. 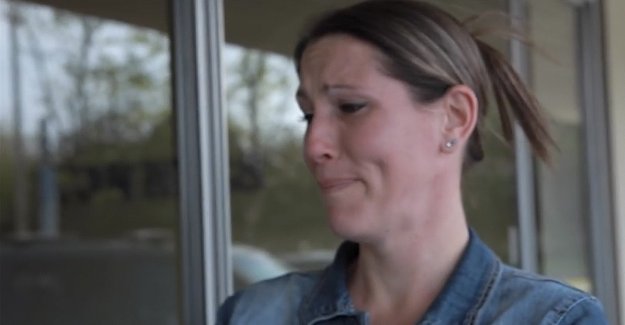 Oregon Labor Commissioner Brad Avakian finalized a preliminary ruling today ordering Aaron and Melissa Klein, the bakers who refused to make a cake for a same-sex wedding, to pay $135,000 in emotional damages to the couple they denied service.

“This case is not about a wedding cake or a marriage,” Avakian wrote. “It is about a business’s refusal to serve someone because of their sexual orientation. Under Oregon law, that is illegal.”

In the ruling, Avakian placed an effective gag order on the Kleins, ordering them to “cease and desist” from speaking publicly about not wanting to bake cakes for same-sex weddings based on their Christian beliefs.

“This effectively strips us of all our First Amendment rights,” the Kleins, owners of Sweet Cakes by Melissa, which has since closed, wrote on their Facebook page[3]. “According to the state of Oregon we neither have freedom of religion or freedom of speech.”

The cease and desist came about after Aaron and Melissa Klein participated in an interview with Family Research Council’s Tony Perkins. During the interview, Aaron said among other things, “This fight is not over. We will continue to stand strong.”

Administrative Law Judge Alan McCullough, who is employed by the Oregon Bureau of Labor and Industries and was appointed by Avakian, threw out the argument in the “proposed order” he issued back in April.

But today, Avakian, who was in charge of making the final ruling in the case—and is also an elected politician—reversed that decision.

“The Commissioner of the Bureau of Labor and Industries hereby orders [Aaron and Melissa Klein] to cease and desist from publishing, circulating, issuing or displaying, or causing to be published … any communication to the effect that any of the accommodations … will be refused, withheld from or denied to, or that any discrimination be made against, any person on account of their sexual orientation,” Avakian wrote. 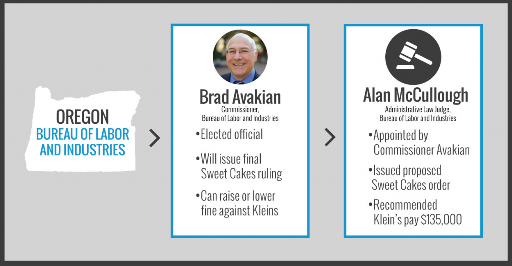 The Kleins’ lawyer, Anna Harmon, was shocked by the provision.

“Brad Avakian has been outspoken throughout this case about his intent to ‘rehabilitate’ those whose beliefs do not conform to the state’s ideas,” she told The Daily Signal. “Now he has ruled that the Kleins’ simple statement of personal resolve to be true to their faith is unlawful. This is a brazen attack on every American’s right to freely speak and imposes government orthodoxy on those who do not agree with government sanctioned ideas.”

Hans von Spakovsky, a senior legal fellow at The Heritage Foundation, called the order “outrageous” and said citizens of Oregon should be “ashamed.”

“This order is an outrageous abuse of the rights of the Kleins to freely practice their religion under the First Amendment,” he said.

It is exactly this kind of oppressive persecution by government officials that led the pilgrims to America. And Commissioner Avakian’s order that the Kleins stop speaking about this case is even more outrageous—and also a fundamental violation of their right to free speech under the First Amendment.

Avakian would have fit right in as a bureaucrat in the Soviet Union or Red China. Oregon should be ashamed that such an unprincipled, scurrilous individual is a government official in the state.

The case began in February 2013 when Rachel and Laurel Bowman-Cryer filed a complaint against the Kleins for refusing to bake them a wedding cake.

At the time of the refusal, same-sex marriage had not yet been legalized in Oregon.

The Bowman-Cryers’ complaint went to the Oregon Bureau of Labor and Industries, which is in charge of defending the law that prohibits businesses from refusing service to customers based on their sexual orientation, among other characteristics, called the Equality Act of 2007[6].

In January 2014, the agency found the Kleins unlawfully discriminated against the couple because of their sexual orientation. In April, McCullough recommended they pay $75,000 to Rachel and $60,000 to Laurel.

In order to reach the total amount, $135,000, Rachel and Laurel submitted a long list of alleged physical, emotional and mental damages they claim to have experienced as a result of the Kleins’ unlawful conduct.

In their Facebook post, the Kleins signaled their intention to appeal Avakian’s ruling, writing, “We will not give up this fight and we will not be silenced,” already perhaps putting themselves at risk of violating the cease and desist.

This isn’t about civil rights or even gay marriage… it’s about control and power. This makes a mockery of the Constitution and everything America has always stood for. This hateful gay couple could have gone anywhere to get their cake, but they were on a crusade and the intent was to destroy someone that was Christian. You don’t see them doing this to Muslims, now do you? These people had served this couple for years… had been friendly and kind to them and this is how they were repaid. With cunning deceit and viciousness. People have no right to strip others of their constitutional rights in order to give themselves a right that was never enumerated in the first place. It is not akin to race… it is sexual preference and does not trump your given rights to speech and religion. This gay couple is enforcing their preferences and beliefs on a couple and trying to force them into agreeing and complying. Liberal fascism in action.