After the fertilizer plant explosion in Texas, Karon Wright apparently became angry about some of the comments other people on Facebook made about Barack Obama. Then Wright, who was a counselor at Andrew Jackson Middle School in Texas, unwisely wrote the following.

“Its amazing how the “whites” get angry when Obama speaks. Oh well…its most of the whites who is getting blown away. So they will soon be wiped from the earth. Lol.” 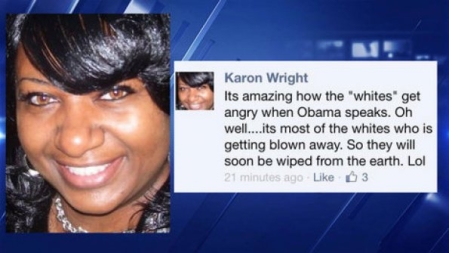 That didn’t go over well with her school district which called her statement “highly offensive, insensitive to the tragedy happening to our friends and neighbors in West, and disrespectful to the very human bond that we share with the people of West, especially those who have lost their loved ones.”

Shortly thereafter, the school wiped Wright’s name from the school website and unceremoniously fired her.

For her part, Wright claims her account was hacked.

“My Facebook account was hacked and the statement that was made is not of my character. I am a school counselor who will never 1) jeopardize my family, 2) jeopardize my job, and 3) jeopardize the trust the students, parents, staff, faculty and administration of GPISD.”

Is it completely outside the realm of possibility that Wright’s account was hacked? No, but it seems unlikely and the fact that the school has fired her already is a good indication that officials are not buying that excuse. Of course, if it does turn out that Wright’s account was hacked, Facebook should have the data that will confirm it so that at a minimum, Wright should be able to get her job back.

On the other hand, if Wright did make those comments, which is the much, much, much more likely alternative, then she should have been fired and she should be deeply shamed of her despicable behavior.