The American Spring Explodes in Baltimore Baltimore literally exploded[2] in violent protests last night as a few hundred #BlackLivesMatter goons shut down the city for some time. They managed to pen up 36,000 Baltimore Orioles fans[3] within their stadium at Camden Yards as they rampaged through the streets, duking it out with bystanders. It’s being claimed that they originally meant for the protests to be peaceful… right. But people shouldn’t fret… President Barack Obama partied down at the White House Correspondents’ Dinner just 50 miles away while all hell was breaking loose. They must have been celebrating the chaos.

That’s their idea of peaceful? Fans from Bullpen Bar, Pickles Pub and Sliders Bar & Grill didn’t take too kindly to the mayhem and a brawl ensued. These thugs just destroyed things for the hell of it and attacked people because they were white. It’s shameful. Talk about racism – this is raw racism on the other side. They smashed out store windows and looted to their little black heart’s content. This is exactly why Trevor Loudon[4] and I both believe this could be the most violent summer on record – an American Spring is blooming with hatred. You can hear chants of “F*ck the police!” and literally feel the tension in the air.

All this was supposedly due to the arrest and death of Freddie Gray, who died from spinal injuries last Sunday after his encounter with the police two weeks ago.

“In a press conference Friday, officials acknowledged Gray should have received medical help at the moment of his arrest, when he was seen by bystanders — and caught on video — howling in apparent pain,” AFP wrote, providing the background of the simmering tensions in the mid-Atlantic port town. “They also revealed that Gray, contrary to police department policy, was not buckled into his seat in the van, which made at least three unexplained stops on its way to the Western District police station. Gray died Sunday with 80 percent of his spine severed at the neck, lawyers for his family have said. His funeral is scheduled for Monday. Six officers have been suspended with pay as the police investigation inches closer to a May 1 deadline to submit findings to a Maryland state prosecutor, who could decide to press charges.”

If true, there is no excuse for how this was handled. But it doesn’t excuse the behavior of the rioters. The whole peaceful protest thing suddenly flashed into a riot, where innocent bystanders were being threatened and brutalized. Then it got even more violent. Beer bottles and cans started to be thrown at fans… cars were smashed… As people looked on, the crowd of protesters stopped a blue station wagon that was carrying a white family as they tried to drive past Pickles, Bullpen and Sliders along a narrow one-way stretch between the bars and the main road. A whole pack of these animals pounded on the car, while blocking it from driving by and standing in front of it. The family was terrified. They backed up to try and flee. They were blocked again and the savages ripped open the passenger door and breached the inside of the vehicle. People, including police officers, just stood and watched. As suddenly as they had attacked the car, the protestors backed off and the people in the car fled the scene with their lives intact thankfully. They were very lucky.

Police helicopters started buzzing the skies around the stadium. As the game was coming to a close, an announcement came over the loudspeaker to the fans that the mayor of Baltimore, due to a public safety emergency outside, had “asked” everyone inside to stay in the stadium and not try to leave. That gentle request was enforced and they were locked behind the gates. At the very last minute, just after 10 pm, the ban was lifted by the mayor and everyone was allowed to leave. But it was a stark reminder of how fast things can change for the worse. 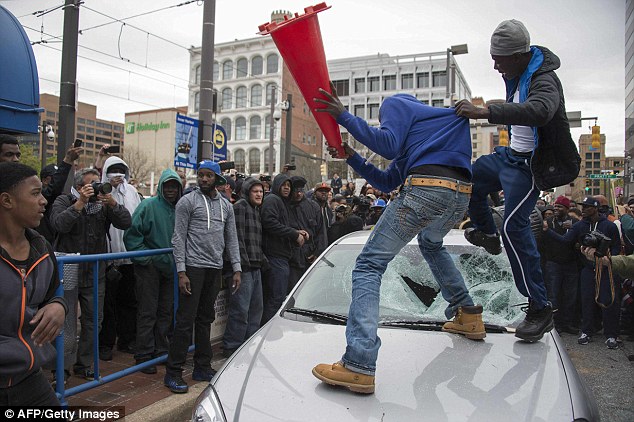 A rally of 2,000 protestors[6] had gathered earlier in the day. The police kept Twittering that they were trying to respect and protect the rights of the protestors. But that didn’t stop the riots, looting and chaos. A wireless store and a 7-Eleven convenience store were looted, according to a CBS Baltimore[7] reporter. At least two people were injured and twelve were arrested. Over 300 police officers were dispatched and there is video of them storming down the streets. Police in riot gear drove the protestors back and around 10 pm they started to disperse. I would wager this is not over by a long shot. 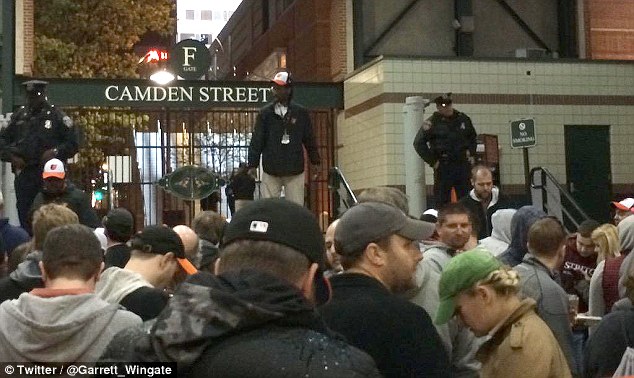 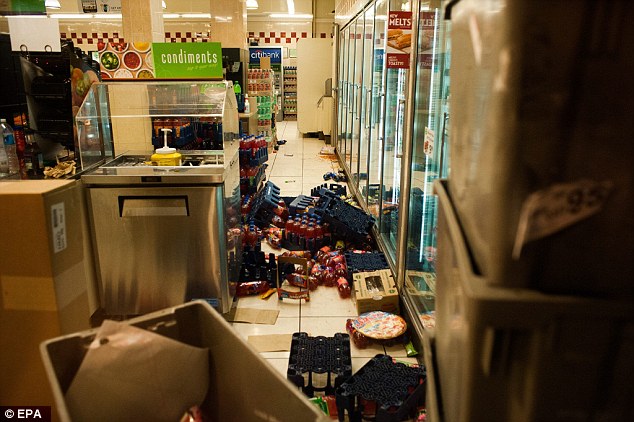 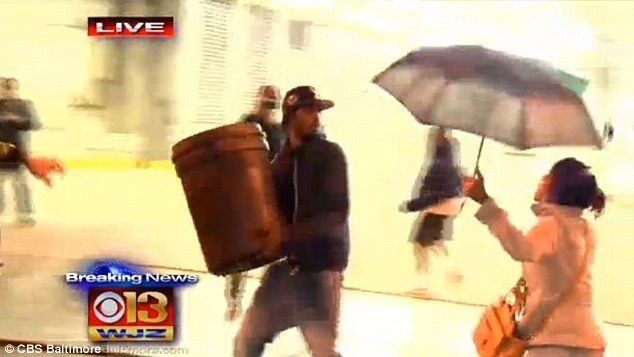 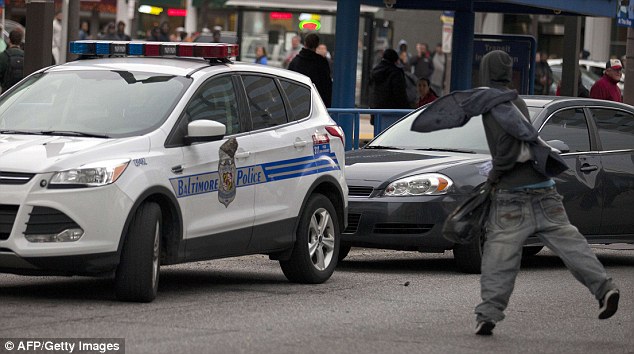 The University of Maryland, Baltimore, which is north of the stadium, issued a shelter in place warning for students as demonstrations turned violent because of ‘civil disturbances’ in the area.

It advised students and faculty not to come to campus.

Baltimore Mayor Stephanie Rawlings-Blake posted on her Twitter account: ‘Thx 2 those who have worked to press for peace during these protests. Concerned about the violence and those who want to destroy our city.’

During a press conference she said that a ‘small group of agitators’ turned the demonstrations violent, according to NBC Baltimore[9].

Fredericka Gray, the twin sister of Freddie Gray who spoke to the public for the first time, urged demonstrators not to be violent and said ‘Freddie would not want this’.

‘Can ya’ll please, please stop the violence?’ she said.

The funeral for Freddie Gray, who died April 19 after suffering a fatal spinal injury while in police custody, was announced for Monday. 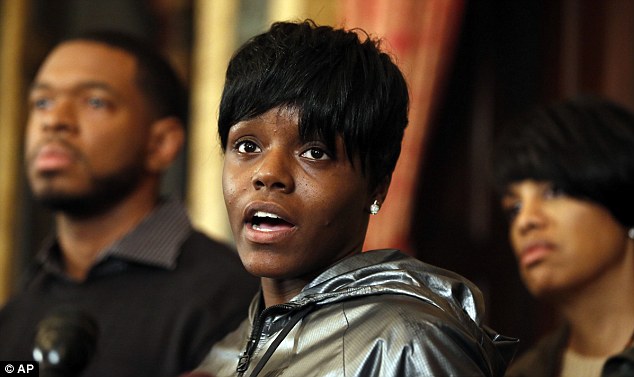 Fredericka Gray, the twin sister of Freddie Gray, said her brother ‘would not want this’
and urged demonstrators to remain peaceful. 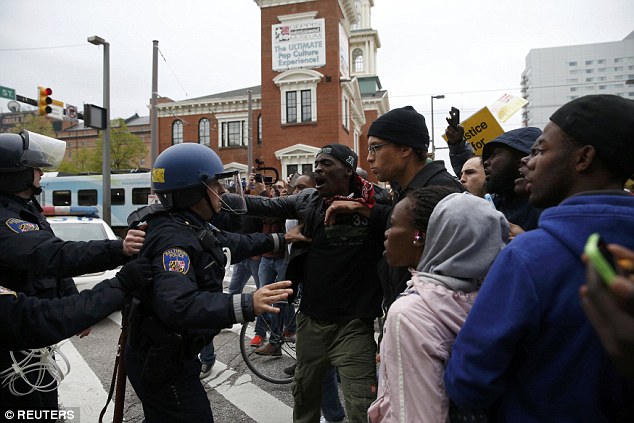 These so-called social justice warriors were touting signs with catchy slogans such as ‘Jail Killer Police!’ and ‘Unite Here!’ The protestors marched 2 miles to City Hall, where they invaded the grassy plaza adjacent to the building. One woman took a page from Obama’s race-charged propaganda, saying ‘I looked at my son,’ she said, ‘and thought ”that is my son.’ Dozens of protestors even laid down in the street in an impromptu ‘die-in.’ How very Occupy. 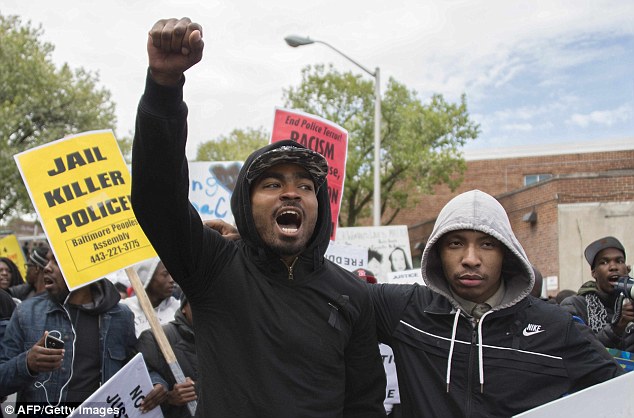 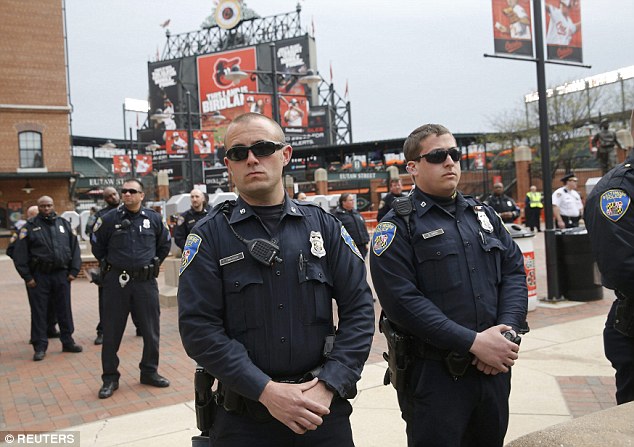 And what would a #BlackLivesMatter protest be without Malik Shabazz of the Black Lawyers for Justice. Yes, that Shabazz… of the New Black Panther Party and the Nation of Islam. Clenched fist in the air, he was there to tout racism full bore. 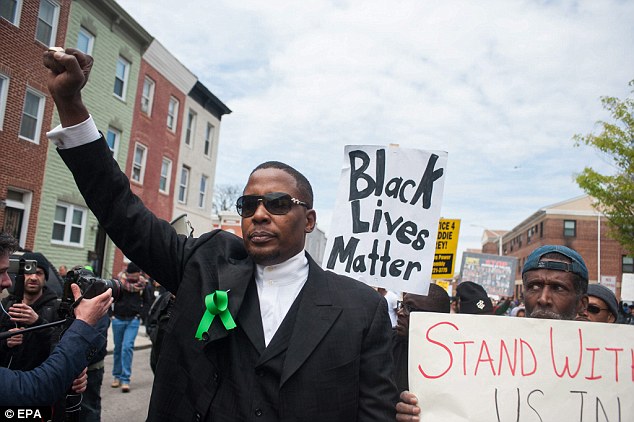 Malik Shabazz, of the Black Lawyers for Justice, leads protesters outside the Western District Police Station. 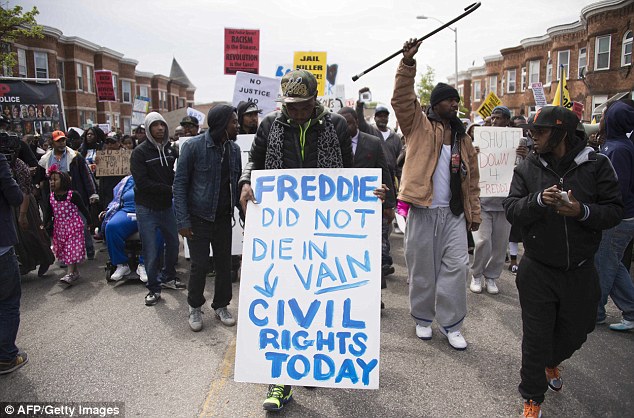 A reporter for Russia Today found out the hard way how sideways an interview can go during violent riots:

They knocked her down[10] and stole something from her… thankfully a police officer chased them down and got it back. It could have been much, much worse.

In a spectacle of utter stupidity and craven cowardice, Baltimore Mayor Stephanie Rawlings thanks ISIS advocates (The Nation of Islam) for their support… No wonder everything is falling apart if this is who we have leading us. I’m sure this is far from over… Stay tuned bat fans. This looks like the beginning of a very violent, chaotic summer in which a European and an American Spring both have the potential to ignite, bringing much more violence into our streets and pressure from our government. As it is above, so shall it be below. Top down, bottom up, inside out…[12]