Why Are Certain Black People Allowed to be Racist?

It’s not racist to ask a question about race. But some people get a pass no matter how racist they are and it’s quite often that certain black people get away with it. “People in The Tea Party are racists…” What kind of statement is that? It’s one that not only goes unchallenged by the mainstream media — but is often repeated with no proof, or even with incontrovertible evidence to the contrary.

Of course there are racists in every ethnic or racial category but when blacks are openly offensive towards other races, they never receive the treatment Paula Dean got. Never.

Yet so-called black leaders, black celebrities and pundits pull the race card, then make you feel the need to walk on eggshells around them? Not everyone is like that, but unfortunately some people make their own people look really ugly and I just happen to not be scared to use my freedom of speech. It’s not racist to want to understand why our society acts like this one-sided game is okay. 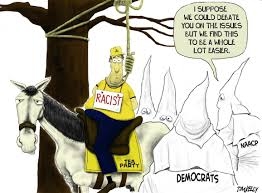 [1] Liberals in the press and in politics encourage black Americans to be racist, encourages Latinos to support supremacist groups such as “La Raza” (“The Race”), and defends Muslims while ignoring Christians. This is all the left’s process of encouraging progressive bigotry as a way of strengthening left-wing political power. Then as icing on the cake, they promote the preposterous idea that all bigotry is to be found on the conservative side and among groups that want limited government and individual liberty. In the end, it’s all about political power. Anyone who’s a potential threat, anyone that gets in their way and sadly — some make a whole lot of money in the process.

Because hate sells and you want to be paid.

What’s ironic is the classic liberal take on race relations is condescending and destructive to the black community. Having people depend on government rather than espousing hard work and family is patronizing to blacks — not to mention demeaning — and yes, racist. As long as people continue to have a victim mentality, and the media perpetuates it like they do — race relations in America will worsen. But this is where the liberal media lives and it’s why Al Sharpton, Charlie Rangel or Spike Lee can use what is clearly racist language and not be called a racist. It’s why three black youths can attack and beat the crap out of a white 6th grader on a bus, break his arm and rob him and are not charged with a hate crime. Pretend I just listed 7 other examples

Playing the race card is an extremely disgraceful thing to do: A: It dilutes support for those who have truly endured actual racism and; B: After time it becomes a “cry wolf” situation where people are so sick of hearing it that less and less people care what racism is anymore. We’re now in a situation where nearly everyone is afraid to say anything or to broach the subject for fear of being call a “racist.” But that’s the way the liberal wants it — to have that racist bullet in the chamber they can fire off at the first sign of being challenged or if they believe you’re on the wrong side of their philosophy. The L.A. Times even printed a story the other day giving Democrats the glory of winning the battle for Civil Rights when everyone knows it was Republicans who pushed it through against the will of most Democrats (hello, Al Gore Sr.).

This is not for praise or credit, but it was whites (Republicans, again) who ultimately ended slavery in America. The same KKK (created by Democrats) who hated and killed blacks also lynched any whites who tried to stop them or who were merely guilty of being Republican. Watch it — here comes the “slavery” crutch…:

When it’s quickly pointed out that some of the Founding Father’s owned slaves, I quickly point out that it probably wasn’t too much better in Africa, where one tribe hunted down and enslaved another, chained them up, put them on the beach and sold their brothers and sisters off to slave ship owners. None of this is good, but quit blaming me — my forefathers were abolitionists. And guess what — I had nothing to do with that either, so no thanks are necessary either.

Even though whites in the north did not own slaves(for the most part), the so-called “Critical Race Theory” which one of our President’s heroes’ Derrick Bell came up with — all whites are the same and all are racist. Any other person in any other group supporting that (racist) theory toward any other group would be branded a racist or bigot, yet in the contemporary guilty white liberal world, blacks get away with it. They sometimes even get rich doing it.

Race pimps are bullies and a bully will only be around as long as the coward wants. Hate and fear does not earn or sustain respect and people who recognize God made us all in His own image won’t let the intimidation these bullies are peddling scare them off.

Yes, Reverend Jackson; Yes, Jay-Z; Yes, Al Sharpton; Yes, fill in the blank — hate pays and you are at the front of the bus… (see what I did there?).

This post was used with the permission of Joe For America[2].