Two Wisconsin residents are suing a town there for banning the display of the American flag and other signs on a highway overpass. 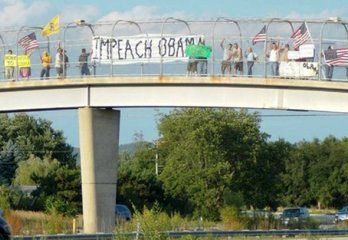 [1]The Thomas More Law Center, acting on behalf of: Nicholas Newman: and: Gregory Luce, filed a federal lawsuit Monday against the town of: Campbell, Wisc.,: for prohibiting citizens “from displaying the American flag and wearing t-shirts which call for the impeachment of: President Obama on a highway overpass,”: according to a press release from the law firm.[2]

The Thomas More Law Center contends that the town enacted an ordinance on Oct. 8, 2013, “in response to some angry calls about the ‘Impeach Obama’ expression on the t-shirts and the resulting media attention.”

The ordinance is identified as “9.12,” a likely spoof on the national tea party movement known as “The: 9-12: Project,” founded by media personality Glenn Beck.

“So I’m astonished that the town of Campbell and the police department think it can ban a citizen from displaying the American flag.”

The men were taking part in a nationwide movement called “Overpasses for America,”: which began in the summer of 2013[3].

Demonstrations held prior to the ordinance had occurred “without incident, or any traffic accidents attributable to their display of messages,” the Milwaukee Journal: Sentinel reported.

Newman appeared on the overpass on Oct. 27, 2013 carrying an American flag and was issued a citation, which carries a fine of $139.00.

The Thomas More Law Center pointed out that the pedestrian overpass in question is a sidewalk with a fence on either side, and the courts have long recognized sidewalks as traditional public forums.

This post was used with the permission of Bizpac Review/Strong>[5].